Jonathan Marchessault and Max Pacioretty scored 45 seconds apart late in the third period to rally the Vegas Golden Knights to a 3-2 victory over the Colorado Avalanche in the second round of the West Division playoffs on Friday night in Las Vegas.

Marchessault tied it, 2-2, with 5:18 to go when he banked in his own rebound from behind the goal line off Grubauer’s leg and into the net for his 17th career playoff goal.

Pacioretty then made it 3-2 when he redirected Nick Holden’s shot from the left point under Grubauer for his second goal of the playoffs and the game-winner.

“You know you get that first goal you just have a feeling the next one’s going to come,” Pacioretty said. “So that floater comes in from [Holden], you just have a little bit more confidence that you’re going to tip it, and that’s how it played out.” 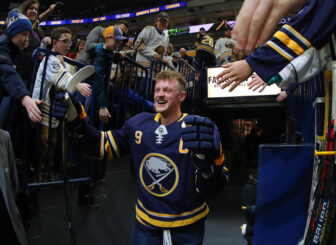 Carey Price on fire for Canadiens

Tyler Toffoli scored the game’s lone goal and goaltender Carey Price recorded his eighth career playoff shutout to give the visiting Montreal Canadiens a 1-0 victory over the Winnipeg Jets and a surprising 2-0 lead in their Stanley Cup playoff series.

Price made all 30 saves needed to earn his first shutout of this year’s playoffs.

“The guys did a great job in front; it was a pretty complete team effort tonight,” Price said. “We’re playing well on both sides of the puck. We’re just making smart decisions and backing each other up all over the ice.”

The Penguins said Friday they expect to have a more definitive time frame for his return at that time.

Malkin suffered the injury on March 16 in the Pens’ game against Boston. He was sidelined for 23 games before making his return on May 3 against Philadelphia. He tallied five points in Pitt’s first-round series loss to the New Islanders.

Check out our Reliving Rangers series this offseason!

In our latest edition we go back to the 1999 draft. Read more.