Lou Lamoriello was certainly very busy this summer. Today, the worst kept secret in hockey was finally revealed with the Islanders making four signings official and other soon to be made official.

According to Michael Russo, Zach Parise has informed him that a deal with the New York Islanders was signed this summer. All that remains is for GM Lou Lamoriello to filed the paperwork with the league.

Parise will be joining the Islanders for training camp later this month.

The St. Louis Blues announced the extension of defenseman Colton Parayko with an eight-year contract worth $52 million.

The $6.5 million annual average value on the contract makes Parayko one of the highest-paid defensemen in the league. His deal now carries through the 2029-30 season, when he’ll be 36 years old.

“I can’t wait to wear the Blue Note for another nine years,” Parayko told the team website. “St. Louis has been my home now for six seasons, and this is where I want to be. All the relationships I’ve gained, the teammates I’ve had, and the organization have all had a big impact on me. Winning here in 2019 was special, and I want the chance to stay here and do that again.

Is a Jack Eichel trade dead?

Yesterday, TSN’s Shawn Simpson reported that Eichel may have surgery “very soon” and his timetable to return would be December.

One thing appears to be likely is that a trade for Eichel is off the table until he recovers.

Additionally, Simpson states that the Sabres are still asking for somewhere between 4-6 pieces. They continue to demand mostly futures, including any interested team’s top two prospects which no one has remotely been willing to do.

Will a healthy Jack Eichel fetch the return the Sabres are looking for? Only time will tell, but prior to his neck injury coming to light one team executive told me that no one is going to give what would essentially be four first picks for anyone. 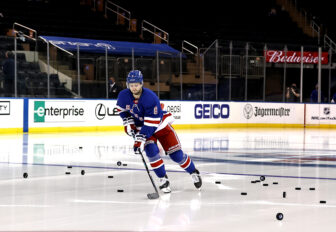 Also Read:
What should the New York Rangers do with Zac Jones?