The NHL playoffs continues to prove that not much is predictable and momentum doesn’t carry over from one game to the next. Last night the Islanders stepped up and evened their series with Lightning.

Islanders even series against Lightning

Josh Bailey, Mathew Barzal and Matt Martin all scored in the second period Saturday night for the host New York Islanders, who survived a third-period rally by the Tampa Bay Lightning to earn a 3-2 win in Game 4 of an NHL semifinal series in Uniondale, N.Y.

The win evened the best-of-seven series at two games apiece. Game 5 is scheduled for Monday night in Tampa.

“Our game was good,” New York coach Barry Trotz said. “I know that we probably had more chances when I look at the game. … Our 60-minute game was pretty decent other than the seven or eight minutes where they surged on us, and we had a surge earlier. This is what we expected, 2-2 going back (to Tampa). It’s a best-of-3 now.”

Josh Anderson’s second goal of the game was the overtime winner, giving the host Montreal Canadiens a 3-2 comeback victory over the Vegas Golden Knights on Friday and a 2-1 lead in their Stanley Cup playoffs semifinal series.

“You guys all saw it tonight, it was incredible,” Anderson said of Price after he made 43 saves. “Not only to play like that, but for the fans too. He kept us in the game all game, and we wouldn’t be sitting here talking about this without him.”

Blackhawks enter Jack Eichel sweepstakes; are the Rangers out?

In a NY Post exclusive, Larry Brooks is reporting that the Blackhawks have entered trade talks for the Sabres 24 year-old injured center.

For Slapshots has learned that the Blackhawks have taken a ticket at the deli counter in communicating their interest in the 24-year-old center, who is in the midst of divorce proceedings with the Sabres while possibly facing a tricky surgery to repair a herniated disk. In order to succeed in the quest, Chicago’s offer would have to feature Kirby Dach — the 20-year-old center who was drafted third overall in 2019, recorded 23 points (8-15) in his rookie season and then played only 18 games last year after he suffered a wrist injury in a pre-World Juniors tournament game.

The article mentions the Ducks as we have noted for a few days, as well as the Blue Jackets, Wild, Flyers, Kings, and possibly still the Rangers. What makes the Hawks intriguing is what is the status of Jonathan Toews who missed all last season with a health issue? If he’s unable to continue his career, then Chicago could fit in Eichel’s $10 million cap hit. 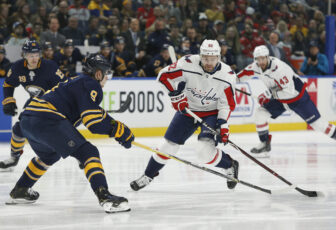 The Carolina Hurricanes Jaccob Slavin was named the winner of the Lady Byng Trophy. He is only the fourth defenseman to win the award after only taking one minor penalty in 52 games this season.

The COVID shortened season had many changes and challenges. First and foremost, the division were realigned and the schedules were made to reduce travel and keep teams within their division. In order to do so, the NHL adopted baseball like series between teams.

In the survey, the NHLPA asked players what they thought of it. The players were opposed to seeing the regional division carrying forward by 68.2%. As for continuing series play schedules, they were in favor of it by 66.3%

So while we know that next season will be a return to the old divisions, scheduling remains up in the air. The NHL has discussed keeping series-style matchups and now they know the players want it too.