One of the funniest stories this offseason just happens to be about Nathan MacKinnon in Colorado. Apparently, Nathan’s commitment to winning starts in the fridge and he wants his teammates to follow.

Newly acquired Calgary Flames defenseman, Nikita Zadorov played for the Chicago Blackhawks last season. Before that, he was a member of the Avalanche for five years. That’s where he saw up close and personal the competitor that Nathan MacKinnon is in Colorado.

In a recent interview in Russia, he discussed just how crazy Nathan MacKinnon is when it comes to nutrition, fitness, and how that ties into winning.

“He’s crazy like that, he eats well. He doesn’t drink either. He only drinks water,” Zadorov said. “Two years ago in Colorado, he got rid of all the desserts he could. He also removed them from the locker room and pre-game meals. He had the white sauce (carbonara) removed from the menu when eating pasta. He even replaced regular pasta with chickpea pasta so we would eat more protein.”

Marc-Andre Fleury explains his decision to play for the Blackhawks

Fleury is certainly ready to go for next season as he sent a message directly to Blackhawks fans on social media. “Hey Chicago, it’s Marc,” he said stepping off the plane. “I just want to let you know I’m in. Let’s get to work.”

However; immediately after the trade from Vegas, he wasn’t sure if he would play.

“There’s a lot that goes into [the decision],” Fleury said Wednesday via NHL.com. “I was very fortunate that they gave me some time to reflect on what I wanted to do, what was best for me and my family.”

“I never had anything against Chicago, the organization,” he explained. “It was just me personally. I’ve talked to a bunch of guys and I keep hearing so many great things about the team, how they treat players and families. I thought Stan did a great job to gain some players over the summer, trying to make this team competitive right away, and that’s also very appealing.”

There appears to be some good news on the salary cap front for many NHL teams. According to a report from Frank Seravalli, the cap may rise for the 2022-23 season.

The NHL is is projecting revenue this season to be close to $5 billion. That is leading to optimism that the cap ceiling will climb from $81.5 million to $82.5 million for the 2022-23 campaign. The NHL is entering its third season under the flat-cap caused by the COVID-19 pandemic. 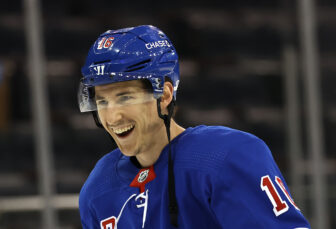