It gets a little darker earlier nowadays, and you can feel a coolness in the air. October is here and the start of the NHL season is less than two weeks away.

As we drop the puck on today’s NHL roundup, we start by looking at the top five trade candidates for this season.

It should not surprise anyone that Jack Eichel would top the list followed by Vladimir Tarasenko. Phil Kessel is most likely to soon be traded within the group. Both Johnny Gaudreau and Tomas Hertl are pending UFA’s and likely to be dealt by the trade deadline if contract extensions can’t be reached. 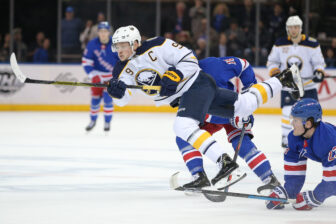 While the MLB playoff races came down to the wire, and the NFL action was starting to pick up this weekend, the NHL found itself reading serious claims from Robin Lehner on social media.

The Vegas Golden Knights goaltender was questioning the use of anxiety medication and ambien among teams around the league.

“Is it common for work places to give out benzodiazepines to employees when they travel and ambien? Should that not be done by doctors or psychiatrist? Asking for a friend,” he said. “This doesn’t happen in Vegas to be clear. But I know many other teams. I also been in on teams that do.”

Lehner then called on the NHL and NHLPA for answers. Yesterday, it was reported that the league would reach out to the 30 year-old netminder for an interview. Additional reports noted that it was not disciplinary but to get more information.

The Montreal Canadiens announced they have extended forward Jake Evans on Sunday. The deal is a 3 year-deal deal worth $1.7 million AAV starting in 2022-23.

Edmonton Oilers forward Josh Archibald is sidelined indefinitely with myocarditis, a heart condition related to his summertime bout with COVID-19.

Archibald was one of the known players in the NHL that was not vaccinated. A list that includes the Red Wings’ Tyler Bertuzzi.

Head coach Dave Tippett provided the update Sunday, and it is the same diagnosis that is expected to sideline Edmonton goaltender Alex Stalock for the entire 2021-22 season.

“He had a severe viral infection coming out of his quarantine,” he said. “What the tests showed is that at some point this summer he’d had COVID, and he tested positive for the antibodies. He has also been diagnosed with myocarditis.”

Archibald, who turns 29 on Wednesday, tallied seven goals and six assists in 52 games with the Oilers last season.

Penguins Jake Guentzel out with COVID

Per the Penguins, forward Jake Guentzel was confirmed positive for COVID-19 this morning. He is being monitored by the Penguins medical staff and will follow the protocols set forth by the National Hockey League.

The Vancouver Canucks made it official Sunday, confirming the signing of franchise cornerstones Quinn Hughes and Elias Pettersson to multi-year deals.

“We’re extremely pleased to have agreed to terms with both Quinn and Elias,” general manager Jim Benning said in a news release. “Quinn has emerged as one of the premier young defensemen in the league, and we’re happy that we were able to make a deal that keeps him in Vancouver long-term. Elias is an exceptional offensive player whose speed and skill are complimented by a strong work ethic and desire to win. Both players will continue to be important parts of this team moving forward.”

Both players were restricted free agents. 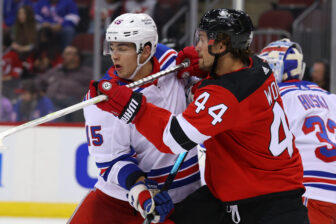