NHL Rumors Roundup is our weekly Sunday feature thanks to our sister site The Daily Goal Horn. Bringing you the top rumors of the week and the latest buzz of the morning, our goal is to being you the most comprehensive update available.

In this edition, we kick off with the latest on the Jack Eichel saga.

Note: The majority of content for this article was originally published at The Daily Goal Horn.

NHL Rumors: Jack Eichel, when will this saga end?

The name at the top of everyone’s trade list is nearing a “resolution” according to his agent, Peter Fish. Most outlets are reporting his comments as some agreement on Jack Eichel’s neck treatment. That could be the case by default, because that treatment is likely going to be decided with his next team.

Eichel, who is 24, had indicated his preference for surgery — reportedly a disk replacement — but said the Sabres disagreed with that route and wanted him to rehab the injury instead.

“Our stance hasn’t changed and where we’re at. It’s in the hands of the medical experts,” Sabres GM Kevyn Adams said. “That’s what I said previously and it’s where we’re at right now. That’s the best I can give you.”

That stance was set back in May when Adams said about the proposed procedure, “[that surgery] has never been done on a National Hockey League player before – Our doctors aren’t comfortable with that.”

It is believed that Eichel will be traded between the Seattle Expansion draft on July 21st and the NHL Entry Draft on July 23rd. The frontrunners to land him are the Ducks and Rangers.

Of the two, Anaheim seems best situated to land Eichel because they have the #3 pick in the draft. The stumbling block could be their unwillingness to part with either (or both) Trevor Zegras and Jamie Drysdale.

As for the Rangers, they were the only known team to make an offer last offseason that the Sabres considered but ultimately turned down. From what I could gather back in March, the offer was along the lines of Ryan Strome, Vitali Kravtsov, Zac Jones, and their 2021 first round pick. They eventually backed off for many reasons back in May.

Let’s see how this one finally ends. 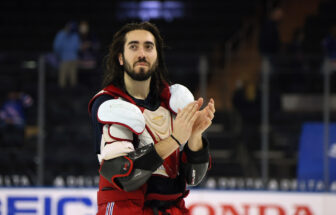 The window to trade Johnny Gaudreau to the Calgary Flames benefit is closing fast. According to the Calgary Sun’s Wes Gilbertson, Johnny Hockey will control his fate starting on July 28.

Gaudreau’s current deal, with an annual salary cap-hit of $6.75 million US, expires at the end of this coming season (2021-22). What makes this matter more urgent is his modified no-trade clause kicks in July 28, allowing him to veto a swap to all but five squads of his choosing.

A Gaudreau trade has been discussed for the last few years. The often rumored likely destination has been the Philadelphia Flyers and they are in the market for more offense. Another team that is looking to add one more scorer are the L.A. Kings after they acquired Viktor Arvidsson earlier this week.

I think that Gaudreau is almost 100% sure to be moved before that clause kicks in.

Duncan Keith and the Edmonton Oilers

The Blackhawks’ Duncan Keith is the one who asked to be out of Chicago. “We weren’t looking to move him, but it was initiated by Duncan,” a source told Scott Powers. That’s because he wants to be closer to his family in British Columbia.

When the 37 year-old defender’s name hit the trade block, one team came screaming to the forefront. The Edmonton Oilers are very interested in adding Keith to their defense, and it sounds like it’s coming from some of the players to boot.

There’s no doubt Keith can be a contributor if used in the right role. Oilers’ GM Ken Holland could slot him on the second or third pair and help stabilize his defense. The biggest benefit would be adding a 3x Stanley Cup champion to the roster to help this team get over its playoff hump.

Where will Vladimir Tarasenko land?

The St. Louis Blues have a projected $17 million in cap space heading into next season. They also have only 7 forwards under contract and that’s not going to be enough fill out a competitive lineup. According to Frank Seravalli, Tarasenko who has two years remaining at $7.5 million per and a no-trade clause is open to a move.

The St. Louis Blues are exploring a trade for star winger Vladimir Tarasenko. While Tarasenko does hold the cards with a full no-trade clause, upon further vetting, it appears the player has alerted St. Louis to several teams he’d be willing to be dealt. A change of scenery is in order.

The 29 year-old is one of the game’s better offensive players. He scored a career high 40 goals back in 2015-16 and has 442 points in his nine seasons. He also comes with a lot of risk. His injury history is not something teams will take lightly, but offensively starved teams will most certainly be giving the Blues a call.

Tarasenko does control his destiny so possible landing spots are his to choose. Eliminating teams with cap issues or others in a rebuild, it’s hard to pick a destination. Will the Blues eat some salary? That could help, but I would not be surprised is he stays put and this is revisited at the trade deadline. 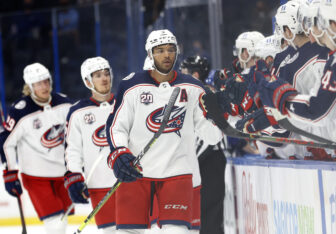 Also Read:
Who are the top NHL players expected to be traded?

As discussion continues to revolve around Kaprizov’s desire to ink a bridge deal versus Minnesota’s want to go long term. “I think it’s just a matter of finding the fair middle ground and what works best for both sides,” he continued. Guerin also said he’s working on a new deal for Kevin Fiala citing it will depend on what the team can afford to pay.

According to the Wild GM, he and Kaprizov are set to meet this week to work on a new deal.

Ron Francis has been taking a number of calls from teams as we are just weeks away from the Seattle Expansion draft. And what has come out of these calls? Well, for the Nashville Predators it forced them to trade Viktor Arvidsson to the L.A. Kings.

“I had a couple of conversations with Seattle, if Viktor Arvidsson was not protected that’s who we would’ve lost,” Pred GM David Poile admitted to Darren, Daunic, and Chase of 102.5 FM. “Two picks is better than losing Viktor for nothing.”

It’s been widely reported that the cost of doing business with Seattle is very high. Especially if you want to work out a deal to protect an exposed player; say Matt Dumba of the Minnesota Wild as an example. According to published reports it starts with a first round pick or no deal. That’s probably what Francis told Poile which led to trading a top six forward for two draft picks.

Going to be an interesting July hockey fans.