This week’s NHL Rumors has a brief update on the Vitali Kravtsov situation with the New York Rangers. However, we lead off with a little bombshell report from Elliotte Friedman last night on Sportsnet regarding Jack Eichel.

“The Sabres do not want to retain any salary. They are willing to take contracts back to facilitate a deal but it is still difficult with so many teams close to the cap and Eichel still having four more years and $10 million a season,” Friedman stated. “Will the Sabres be willing to budge on that?”

Then Friedman gave us the jaw-dropping revelation.

“One team I believe made a call to Buffalo to see if there was a way to make it work was the Colorado Avalanche,” Friedman revealed. “The Avalanche were told Buffalo wasn’t in position to take on salary and I heard the talks stopped right there.”

Whoa! So the offensively stacked Colorado Avalanche were trying to add Eichel? While Friedman didn’t;note when this happened, one would think it was before Gabriel Landeskog signed his deal. It could also explain why it went down to the wire. The Avs have no cap space to make an Eichel trade right now unless Buffalo took back players like Nazem Kadri and Erik Johnson in return.

“Until that hurdle moves a little bit or a solution found to it, I think it’s going to be one of the issue (for a Jack Eichel trade),” Friedman concluded.

Also during the segment, Jeff Marek defused the idea that Golden Knights with all their injuries could afford to send any healthy body to Buffalo to make a deal.

One has to wonder, what teams would could involved or re-involved if the Sabres did retain some salary?

Rangers trying to get Vitali Kravtsov to return

Currently, there is no word on Kakko’s injury or if he will miss any time.

Kravtsov, 21, whom the Rangers selected 9th overall in the 2018 Draft wants out so bad that he will report to the AHL, so long as it is for another organization.

Will he agree to return for a brief conditioning stint and return to the Rangers? Some don’t think so as the relationship appears fairly strained. However; stranger things have happened.

I reached out to Kravtsov’s agent Dan Milstein about the request but he declined to make any public comments at this time. 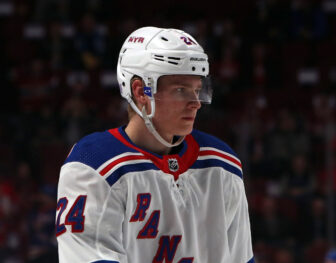 Could the Devils make a play for Eichel?

Larry Brooks of the NY Post dropped this little idea in his Sunday Slap Shots column.

“So you’re Tom Fitzgerald, GM, and you have the chance to acquire Jack Eichel,” he wrote. “Are you interested if Nico Hischier is the featured piece of the package going the other way?”

The idea of the Devils possibly being in on the Jack Eichel sweepstakes isn’t new. Matter of fact, he could be a perfect there as New Jersey isn’t done retooling their roster to compete and they have young assets to get a deal done. They also have almost $10 million in cap space to make it work.

Klingberg, 29, 36 points in 53 games last year, and is headed towards UFA status next summer. According to reports, the two sides have been talking but so far they appear to be far apart on terms.

“There’s mutual interest, obviously, to get this guy locked into a long-term deal,” David Pagnotta said via TFP. “Both the Stars want it to happen and John Klingberg himself wants this to happen. But I can tell you, he’s a little bit disappointed that they weren’t able to get a new deal done by the start of the season.”

Based on some of the monster deals free agent defensemen have been signing, Klingberg could be asking for a significant increase from his current deal that pays $4.25M AAV.

“I can safely report that [Klingberg] is looking for an 8 year contract around $62 to $66 million,” Marek said Saturday.

The Dallas Stars opened up the vault for Miro Heiskanen at eight years for $8.45 million. They also have Esa Lindell with 4 years left on a deal that pays $5.8M and inked Ryan Suter for 4 years at $3.65M this summer. It’s possible that there just won’t be the money Klingberg is looking for.

If Klingberg hits the market, he will be a sought after commodity. 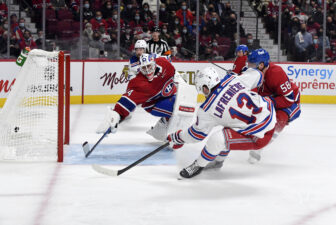