NHL Rumors Weekly is our main Sunday feature thanks to our sister site, The Daily Goal Horn. Bringing you the top rumors of the week and the latest buzz of the day. Our goal is to have the most comprehensive update available.

In this edition, we kick off with news on Mika Zibanejad.

A new report from Larry Brooks says that the Rangers and Mika Zibanejad have begun talks on a new extension.

We can report that there have been preliminary discussions between Drury and Zibanejad’s agent, Monir Kalgoum, who happens to be the center’s brother. Our best information at this point is that Zibanejad is seeking a deal that would be at least commensurate with the one under which Eichel is operating in Buffalo. That would entail a commitment of $10 million per year.

Zibanejad, 28, is coming off a season where he was mired in a slump for the first half. This had some questioning if the Rangers would be wiser to move him in a deal for Eichel early on. He came to life around March to finish the season with 50 points in 56 games. In his last two years, he’s recorded 65 goals and 125 points in just 113 games.

There’s little question that Chris Drury would like to retain Zibanejad. Yesterday, he touched on the topic. “Mika is a huge part of our team. I’m not going to discuss his contract or anyone else’s publicly,” he said. “I have a ton of respect for him as a person and a player.” 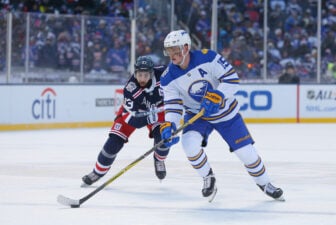 Also Read:
Can the Rangers have both Mika Zibanejad and Jack Eichel on the same team?

The clock is ticking on pending UFA Dougie Hamilton’s time in Carolina. In just a few days, Free Agency opens around the league and Canes GM Don Waddell wants to know what Hamilton intends to do.

Waddell still wants to sign Hamilton, although it is unclear what Carolina is willing to pay. After Seth Jones inked an 8 year-deal worth $9.5 million annually, Hamilton must be looking at a similar contract. Remember, this is the same team that traded Calder Finalist Alex Nedeljkovic over his demand for a $3M AAV contract.

Meanwhile, the NJ Devils have rolled out the red carpet for Hamilton. According to Larry Brooks of the NY Post, Devils GM Tom Fitzgerald sent out an email with a link bestowing all the plusses of signing with NJ.

We’re told that there might be mutual interest between the Devils and Hamilton, who previously had been linked to the Kraken. That interest could come in the form of a seven-year deal worth an average of $9 million per. The contract would essentially replace P.K. Subban’s when No. 76’s deal expires at the end of the season. It would also create a splash.

The never-ending trade of Jack Eichel

So far two of three major pieces have been moved with Jack Eichel remaining. It began Friday when Rasmus Ristolainen was dealt to the Flyers and it carried on late into the night. Multiple reports indicated Sam Reinhart had been traded to the Panthers. That deal was finalized Saturday.

So what’s up with Eichel? This one feels like it is about to get ugly. There are a number of questions here and you have to wonder what exactly are the Sabres looking to do here.

To his credit, GM Kevyn Adams has made it clear that he will not be trading Eichel unless he gets what he wants. Which everyone says is still too high, and all we know is that it’s a rumored four pieces. There has been no definitive report as to any specific trade package offered or rejected.

According to a recent report in The Athletic, the Pegula’s who own the Sabres want to trade him out West. It also sounds like they would be willing to accept less in order to keep him out of the East.

Adams relayed yesterday that he has a good relationship with Jack and that he would accept him back at camp. That sounds like the right thing to say, but Eichel and his agent still want out of Buffalo.

“I have no sort of in any way, shape or form hard feelings with Jack Eichel. I like Jack,” the Sabres GM said. “I’ve talked to his agent twice [Saturday]. I understand where he is, but from my standpoint, he is a player on our team and a very good one.”

Expect Eichel’s camp to turn up the heat today. 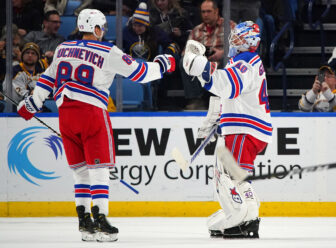 Also Read:
Massive update to the NHL Trade Bait Tracker as 10 players off the board, and two Rangers added

Zach Hyman on the verge of signing with the Oilers

The Edmonton Oilers spent time with Zach Hyman to court him into coming to play there. It appears that is on the verge of happening. There was some though that a sign and trade with the Maple Leafs was in the cards in order to give Hyman an 8 year-deal, but there’s a disconnect as to what that’s worth.

With a sign and trade unlikely at the moment, it appears Hyman will sign with Edmonton when Free Agency opens on July 28. Max term in that situation is 7 years.

“We’ve been in that situation before at the trade deadline and when you’re in that spot the other GM’s aren’t helping you out. They’re pulling the pin from the grenade and they’re throwing it to you,” Dubas said Saturday. “I know that there’s a narrative that we should just get something, but when you’re saving a team significant dollars on the salary cap that comes with a cost and we’re not going to bend on that.”

–This article first appeared at The Daily Goal Horn.