NHL: Seattle Kraken must rise out of Golden Knights shadow

From the drop of the puck in their inaugural season, the Seattle Kraken will be caught between the devil and the deep blue sea.

When the Kraken hit the ice on Oct. 12 against the Vegas Golden Knights, it will be more than just their debut game. That clash in Las Vegas will be against the closest thing they have to an expansion cousin, and a team whose first-season exploits will — unfairly or not — be the standard by which the Kraken will be judged.

Kraken will deal with Golden Knights comparison all season

The Kraken had best batten down the hatches in anticipation of the non-stop comparisons and expectations that will be nearly impossible to duplicate.

After all, the Golden Knights boasted the greatest debut season for an expansion team in North American sports history.

En route to reaching the 2018 Stanley Cup Final, which they lost to Alex Ovechkin and the Washington Capitals, the Golden Knights posted the most wins by a NHL expansion team, claimed the Pacific Division title and became the first team to reach the playoffs in their inaugural season since the Edmonton Oilers and Hartford Whalers joined the league in 1979-80 from the defunct World Hockey Association.

Seattle will have a monster of a time scaling those heights.

That said, for myriad reasons it would be just as crazy to expect a march to the Final as it would be to write off the Kraken as the second coming of the hapless Capitals when they first joined the league in 1974-75.

Seattle Kraken have a solid team

While Seattle’s roster doesn’t look like a legitimate contender for the crown, the Kraken can’t be written off completely as a non-playoff team. The first reason has to do with how awful the rest of the Pacific Division remains.
Vegas appears to be the class of the eight-team division, but after the Golden Knights there is a trio of middling and deeply flawed squads based in Western Canada (the Calgary Flames, Edmonton Oilers and Vancouver Canucks) and then three rebuilding California clubs (the Anaheim Ducks, Los Angeles Kings and San Jose Sharks).

As at least three teams from the division will advance to the Stanley Cup tournament, the Kraken should not be envisioned as dead in the water. Likely the Flames, Oilers and Canucks will finish ahead of Seattle when the regular season is complete, but the Kraken squad built by general manager Ron Francis has many of the same attributes that made Vegas an overnight success.

The boldest move was signing free agent goaltender Philipp Grubauer from the Colorado Avalanche, which gives Seattle a strong one-two punch in net with Chris Driedger the likely backup.

Who will rise for the Kraken?

On the surface, it would appear the Kraken lack star power, but that was the belief of the Golden Knights before William Karlsson posted a 43-goal campaign while several others — notably forwards Jonathan Marchessault, Reilly Smith, Erik Haula and Alex Tuch and defensemen Nate Schmidt and Shea Theodore — had breakout seasons and veterans David Perron and James Neal delivered to expectations.

Can Seattle replicate that feat? It’s not far-fetched. In fact, the Kraken may have even more offensive punch. Forwards Jordan Eberle, Jaden Schwartz, Yanni Gourde and Marcus Johansson all boast multiple 20-plus goal seasons in their career, while Joonas Donskoi, Alexander Wennberg, Jared McCann and Calle Jarnkrok are in their prime years and looking forward to greater opportunity.

On defense, the Kraken can boast even more proven players than Vegas had. Mark Giordano will turn 38 a couple of weeks before the season and cannot be expected to replicate his Norris Trophy season of 2018-19, but a 45-point campaign isn’t out of the question if he’s around all season.

While none of the defensemen under contract for Seattle appear to have the upward potential Theodore had before joining Vegas, the Kraken roster also includes Adam Larsson, Jamie Oleksiak and Vince Dunn. They are all capable of turning a game.

Plus, there’s always a chance an out-of-the-blue rookie surprises when given a chance, with expansion draftees Morgan Geekie and Alexander True possible candidates.

As likely as it is the Kraken will be outside the playoff picture when the Stanley Cup chase begins, the team features elements indicating it is on the right tack to being a factor quickly. Plus, with some solid drafting — one area in which the Golden Knights have struggled in their evolution — Seattle could be as much of a Cup contender as the established teams in their division within their first three seasons. 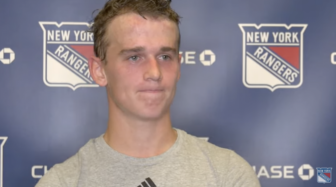