They enter this week with that same record looking to build upon their strong start in wins over the Tampa Bay Lightning and Minnesota Wild. That being said, they want to clean up their defensive lapses that cost them at least a point in Winnipeg.

“I wanted to have a good hard practice (on Sunday) and get them ready to play another game,” coach Gerard Gallant said. “We’re just trying to get better in the d-zone.”

Mika Zibanejad was the first star of the game after scoring a short-handed goal, and then the power-play tiebreaker early in the third period. Barclay Goodrow added a deflected insurance tally with nine minutes left in regulation to help the Rangers exact some revenge on Tampa Bay, which eliminated them in last season’s Eastern Conference Finals. Igor Shesterkin made 26 saves in the contest.

“I thought we played our game from minute one,” Zibanejad said. “I think a lot PP and PK today and it was good to get that going. It turned out pretty well.”

Artemi Panarin posted a goal and three assists as the Blueshirts notched their second consecutive victory. His linemates, Vincent Trocheck (one goal, one assist) and Alexis Lafreniere (two assists), each chipped in a pair of points in the team’s first road win of the season. Chris Kreider, who scored 52 goals in 2021-22, notched a pair of goals. Norris Trophy candidate, Adam Fox recorded a goal and an assist. Youngsters Kaapo Kakko and Filip Chytil also added tallies in the rout. Shesterkin was the winner in net stopping 33 of 36 shots.

“The guys played a real good game tonight,” Gallant said. “It’s nice to see the scoring spread around our group. Kaapo and Fil scored big goals tonight going to the net. It’s nice to see for our team.”

Connor Hellebuyck made 40 saves, Sam Gagner scored the go-ahead goal at 15:35 of the third period to hand the Rangers their first loss of the season. Dryden Hunt scored the team’s lone goal and Jaroslav Halak made 30 saves in his Rangers debut. Artemi Panarin picked up his sixth point of the season, tied for the NHL scoring lead with Pittsburgh Penguins star Sidney Crosby.

Rangers captain Jacob Trouba had his 600th career game spoiled by the team that drafted him 9th overall in the 2012 NHL Draft.

“It got away from us tonight,” Trouba said. “We’re not going to play perfectly every game. We’ll learn from it and address it going forward.” 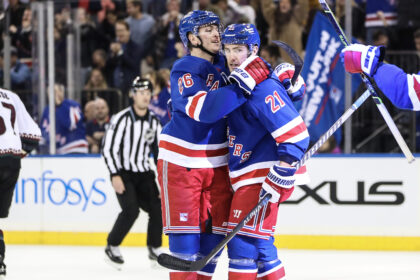 The New York Rangers will play three games this week, all at Madison Square Garden as part of a four game homestand.

This should be an easy week for the Blueshirts. The three teams are 1-8-0 combined on the season. All of them finished below .500 last season and out of the playoffs.

Some familiar faces will be welcomed back at the Garden this week with the Ducks Ryan Strome and Frank Vatrano on Monday night. They’ll be followed by new Sharks GM Mike Grier and coach David Quinn on Thursday, both spent time with the Rangers organization.

When the Rangers take on the Blue Jackets, they’ll do so without Patrik Laine. He injured his elbow in the team’s first game and will miss 3-4 weeks.

The Rangers are more than capable of winning all three contests, but should gain at least a point in each of them.

Catch up on the rest of the NHL here.