The American Hockey League opens up their 87th season beginning on Friday, October 14th. It also marks the start of the Hartford Wolf Pack’s 26th season as well. The group will play two road games in Charlotte before opening up at home against the Wilkes-Barre/Scranton Penguins next Saturday, October 22nd.

Through the off-season, the Rangers retooled the Wolf Pack, making them stronger after a disappointing end to the 2021-22 campaign. This year’s group consists of returning and new veterans, along with a fresh crop of prospects in the Rangers system.

The roster has shaped out to be well-rounded and nicely thought out by the organization. Once again, the goal is to make the playoffs and end the drought of missing post-season action. The last time the club made the playoffs was in the 2014-15 season.

As Wolf Pack fans remember, that journey was a great one as the club reached the Eastern Conference Finals before being eliminated by the Manchester Monarchs (Los Angeles affiliate at the time) in four games. This year’s roster has a similar setup as the 2014-15 season in terms of potential, especially on offense.

The Wolf Pack will compete in 72 games this season. For the 2022-23 season, all teams in the AHL will play 72 games and standings will be based on points.

Folks, I am excited for this group as the Wolf Pack could be making noise. Stay tuned for coverage of the team on Forever Blueshirts!

In addition, further coverage of the team and Rangers prospects can be found by fellow Wolf Pack fan, Alan Selavka on the site! There will be plenty of content for this promising season.

The Wolf Pack completed their preseason action last week against the Bridgeport Islanders. Hartford went 2-0 against Bridgeport in a home and home series as both clubs continued to refine their respective rosters.

The Wolf Pack dug themselves a 3-0 hole only to comeback and win in regulation against the Islanders last Thursday afternoon. After a slow start and having struggles on the penalty kill, the group refocused and turned the tables on Bridgeport.

Hartford answered with two late first period goals to make it a one goal game. Patrick Khodorenko netted his first of the preseason on the power play, with assists from Austin Rueschhoff and Lauri Pajuniemi. The second goal was unassisted, given to defenseman Tim Theocharidis (invited to camp on tryout).

Hartford tied the game early in the second frame with a nifty goal by Alex Whelan. Ryder Korczak recorded the lone assist. After good action on both ends of the ice, Bridgeport regained the lead of 4-3 near the halfway point of the second.

The third frame was strong for Hartford as the club recorded two unanswered goals and upped their game against Bridgeport. Lauri Pajuniemi recorded the first goal of the frame on the power play, with the lone assist to Louka Henault. Hartford registered the winner late in the third as defenseman Blake Hillman scored, with the lone assist credited to Whelan. Shots favored Hartford 26-21.

Check out the game recap here from Alan Selavka. The Wolf Pack had a dominate game to conclude preseason.

There are players to certainly watch as the season progresses in Hartford. Let’s dive into who to look for:

After coming off four great seasons with University of Massachusetts (Amherst) in Hockey East, the 23 year-old prospect will be playing in his first full season with Hartford as a rookie. The forward played in 11 games with Hartford last season, contributing one goal and two assists for three points. In his brief stint, Trivigno showed a good ability to forecheck and set up offenses. He has potential to be a playmaker and be able to provide help in the defensive aspect of the game. As his development progresses, he will be a fun player to watch. He has high-ceiling potential and brings in a strong skill set.

The 23 year-old completed his rookie season last year with Hartford. In 51 games, Pajuniemi contributed 13 goals and 13 assists for 26 games. The prospect has a good rookie season under his belt, battling adversity early on from the COVID-19 outbreak which resulted in Hartford pausing the season. He also battled back from injuries and despite missing games played well. When he gets going offensively, Pajuniemi is a strong factor on the ice. He has a great shot, speed, and is able to read plays well. The Finnish winger adjusted nicely to playing on the smaller rink surface and was acclimated easily to Hartford’s coaching staff and style. I expect the prospect to have another strong season with the group, especially with the new additions up front.

Acquired by the Rangers over the off-season from Arizona, the 22 year-old prospect completed his first professional season with the Tucson Roadrunners. Emberson contributed four goals and seven assists for 11 points in 58 games. Prior to joining the Coyotes organization, the defenseman played with the University of Wisconsin for three seasons. The prospect is an up and coming player that provides a good skill-set on defense. He should develop further this season and will become one of the key players on Hartford’s young defensive core.

The 20 year-old center brings size and physicality to Hartford’s lineup. Rempe will be playing his first professional season this year. It will take time for the prospect to adjust and when he does, he will become efficient in all ends of the ice. He has the potential to utilize his body well and will bring his game on a nightly basis. I am excited to see how he will be used in Hartford as well, whether on the penalty kill or power play. His size will be a plus and he should give opponents a hard time.

The 20 year-old is another prospect that has a high ceiling in the organization. The forward played with Hartford in the shortened 2020-21 season. In 18 games, Cuylle contributed two goals, three assists for five points. He returns after completing last year with the Windsor Spitfires of the Ontario Hockey League. The prospect is a nifty goal scorer and will certainly help Hartford’s offense. He also brings in size as well to the lineup, which is beneficial. The forward will grow as the season progresses with the mentoring from Hartford’s veterans.

The following players were assigned to the Jacksonville Icemen to begin their training camp:

The following players were released:

The Wolf Pack have finalized their roster! Check it out below:

NOTE: * indicates the player is a veteran.

Hartford will open up the season on the road in Charlotte for two games against the Checkers. The two outings are back to back. This is the first of two trips to Charlotte this season. 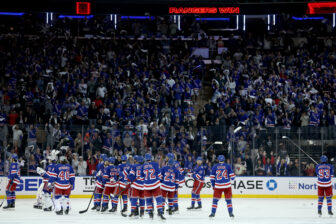