The NHLPA released its annual player poll and not a single member of the New York Rangers was recognized. This is not necessarily a big thing, but one of them is up for a major award which is concerning.

According to the NHLPA’s website, 490 players were survey on 14 hockey-related questions. On the topic of who is the best defenseman, Victor Hedman won it by a landslide.

Hedman garnered almost 65% of votes with Roman Josi coming in second with just 7.35%. Cale Makar who is also a Norris Trophy Finalist with Hedman received 7.35% of all votes. The top five d-men was rounded out with Drew Doughty (2.73%) and John Carlson (2.10%).

Adam Fox, who had a great season and is a Norris Finalist himself, did not get enough recognition to crack the top five. 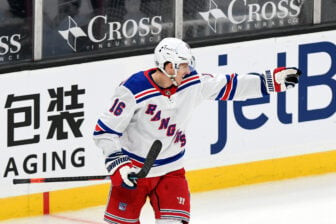 What a season the 23 year-old from Jericho, LI had. Fox finished second overall in scoring for blue-liners with 47 points. His 42 assists were the most by an NHL defenseman and he was seventh for total ice time. Only Edmonton’s Tyson Barrie had more points playing on a team that boasts both Connor McDavid and Leon Draisaitl.

Winning the Norris Trophy would be special for Fox. If he were to be selected, he would be just the second defenseman to win it in his sophomore season with the great Bobby Orr being the only other one. However, if he were to win it, Fox would be the first ever to do so without his team qualifying for the playoffs.

In researching all winners starting in 1953-54, no Norris winner ever missed the playoffs. Starting with the Red Wings Red Kelly, not a single one earned the honor without his team in postseason action. Some may quibble that last year’s winner, Roman Josi was the first but the Nashville Predators were part of the Return-To-Play format. Even though they lost in the qualifying round, all points scored in those games were categorized as playoff stats.