Berzolla, a 23 year old defenseman spent the last four seasons with Colorado College. In addition, the defenseman recorded 15 professional games with the Florida Everblades of the ECHL. Berzolla has taken a leadership roles while in the college ranks. Berzolla also provides solid defensive abilities and has stays in his position well. He grinds out every shift and ensures to give opponents a tough time.

Giuttari, 25, enters his second full season with Hartford. Prior to last season, the defenseman spent four seasons with Brown University, taking leadership roles as well. Giuttari made his professional debut in the 2019-20 seasons in the last game for the Wolf Pack. Since then, the defenseman has shown promise last season in the condense number of games. He once again proved himself to earn another deal with the organization.

Brassard, 27, is entering his second season with the organization. The goalie split time between the ECHL and AHL last season. He played in nine games with a 4-4-1 record, .895 save percentage and a 2.83 goals-against average.

DiGiacinto, 25, is joining the organization after four years with Acadia University at the USports level in Canada. The forward is a former 6th round pick of the Lightning in 2014.

Sanchez, 23, will join the Wolf Pack for his second season. The forward notched 5 points in 8 games with the Wolf Pack during the 2020-21 campaign.

Whelan, 24, played in ten contests and scored three points for the Pack last year. The forward is starting his second season with the organization.

As to who will make Hartford’s roster, will be a tough call. However, this strong competition is great for the organization.

It will be a fight for spots in New York and Hartford. Jacksonville will be a solid team for development as well. Despite which team the prospects are on, there will be work to do to enhance everyone’s skills. 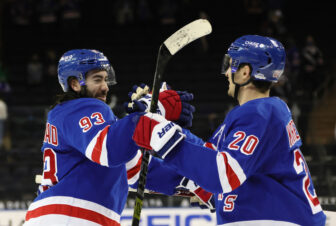