Alexandar Georgiev made an agent change, which was reported by ESPN’s Emily Kaplan on Saturday.

The goaltender was with Octagon represented by Robert Hooper and Mike Liut. He’s now switched to TSC Hockey and agent Gerry Johansson.

This summer, Georgiev will be a pending RFA with arbitration rights and expects to be working out a new deal, quite possibly as an unrestricted free agent.

It’s been reported here and on multiple sites that the Rangers will not be extending Georgiev a qualifying offer. His current cap hit is $2.425 million and Chris Drury is looking for a much cheaper option to back up Igor Shesterkin.

The Rangers will attempt to trade his rights at the draft, for likely no more than a third round pick. If no trade is made, Georgiev will become a UFA on July 1.

Regardless, a new contract will be hammered out and it’s likely one of the main reasons Georgiev is making the switch.

Georgiev has been rumored to be wanting a change of scenery dating back to the offseason.

“There’s only one way to be in game rhythm is to play,” Georgiev said after losing to the Wild. “We’ve been doing some drills with [Benoit Allaire] and working hard in practice. I don’t know what else we can do. That’s maybe for us to think about.”

Greg McKegg made a triumphant return to the lineup on Saturday. He started the comeback when K’Andre Miller’s shot deflected off his leg. The Rangers eventually won the game against the Stars 7-4.

In response, the Rangers have sent down forward Tim Gettinger back to the Wolf Pack.

The New York Rangers announced on Sunday that the club has assigned forward Tim Gettinger to the AHL’s Hartford Wolf Pack.

Over the course of four seasons, all with the Wolf Pack, Gettinger has scored 95 career points (49 g, 46 a) in 175 AHL games. He has also suited up in 16 NHL contests, all with the Rangers, and recorded one assist. 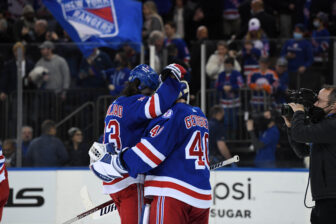 Also Read:
New York Rangers trade rumors will be a focus with 1 week until trade deadline