Rangers benefitting from some key off-season decisions so far

The New York Rangers are currently 13-4-3 for 29 points, which is significantly better than most expected. Chris Drury’s off-season decisions are definitely among the reasons for the team’s early success.

Of course, Chris Kreider’s hot start and Igor Shesterkin’s spectacular goaltending are important factors. However, hiring Gerard Gallant as Head Coach, bringing in Ryan Reaves, Barclay Goodorw, and opting to protect Kevin Rooney in the expansion draft have also made a difference.

When David Quinn was initially brought in to coach the Rangers in 2018, he seemed like an appropriate choice. The Rangers were in the early stages of their rebuild and were getting younger. It was logical to assume that Quinn would handle the young players well and successfully aid in their development. However, this appeared to be refuted last season since Kaapo Kakko and Alexis Lafrenière did not progress as expected.

The narrative that Gerard Gallant is a “player’s coach” is holding true. The most notable example of this is how he’s handled the younger players. Kakko struggled to start the season, but Gallant gave him a chance instead of severely decreasing his ice time as punishment. Kakko was able to start producing and even hit a five game point streak. He also gained confidence which is something he seemed to lack at times under Quinn.

Lafrenière is finding a role and a solid spot in the lineup as well. Gallant has him playing with Filip Chytil and Julien Gauthier. The trio is clicking of late. All three are still young NHL players who are finally starting to have success. Quinn likely would have split this line up already, but Gallant has kept them together. This stability is important for their improvement.

Aside from the development of young players, the Rangers seem to be more structured and less confused. Towards the end of last season, there was an obvious disconnect between Quinn and the players. But the team is clearly responding better to Gallant. It’s no coincidence that they’re starting the season 13-4-3. While doing much of what needs to be done to win falls to the players, the coach does play an important role. 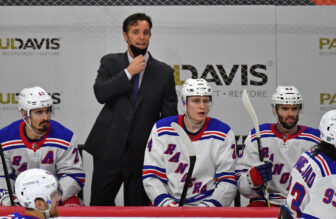 When the Rangers acquired Ryan Reaves from the Vegas Golden Knights, it was with the intention of adding grit to the lineup. Reaves is a player who is comfortable in his role as an enforcer. He has added an element of physicality and has had one fight. While some may have expected him to have more fights already, Reaves has been effective regardless. He even picked up two assists against the Islanders last week.

Reaves is a tough player, not a reckless one. His one fight came at a time where it wouldn’t hurt the Rangers. Situational hockey has been an issue at times for this team, but Reaves has not contributed to that. He understands that it is not useful to start a fight and take a penalty if the Rangers are chasing the game or holding onto a one goal lead late in the game. His purpose is to be physical, improve the Rangers’ fourth line, and send a message to other teams that the Rangers aren’t soft like last season. Reaves isn’t trying to be a goon that fights at every opportunity.

Younger players have started to follow Reaves’ lead. Lafrenière is one player in particular. He had his first fight against Jean-Gabriel Pageau of the New York Islanders after Pageau took some liberties with Ryan Lindgren. This was Lafrenière’s first fight. Part of the goal for this season is to refute last year’s narrative that the Rangers weren’t tough enough to compete. The addition of Ryan Reaves is helping to solve this problem. Not only is he not afraid to play physically, but this attitude seems to be infectious which helps to spread grit throughout the lineup.

It seems that teams are already seeing the Rangers differently. Prior to the start of the season, Reaves talked about wanting to hold people accountable. Others seem to adopting this attitude as well which is important in order to make it clear that teams can’t take advantage of the Rangers like last season. 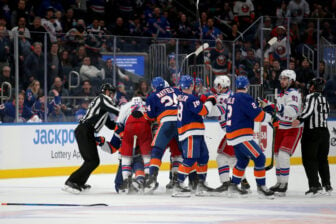 Many were surprised when Chris Drury chose to protect Kevin Rooney in the Seattle Expansion Draft. Prior to the draft, there was much debate over whether Colin Blackwell or Julien Gauthier would be protected. However, management chose to protect Rooney instead which seemed strange at the time. Blackwell revived his career with the Rangers last season and Gauthier is young yet. But protecting Rooney was the right decision.

Last season, Rooney proved he could be a solid fourth liner. One of management’s intentions going into this year was to improve the fourth line. Keeping Rooney there and adding Ryan Reaves and Barclay Goodrow, as we’ve recently seen, is a big upgrade from last year. This line has grit and some skill. Rooney has five goals on the season including two against the Islanders. This fourth line played well in that game and looked like the fourth of a truly competitive team. The Islanders were missing players due to COVID, but the Rangers’ fourth line did play objectively well.

Kevin Rooney is a solid bottom six forward who is reliable in the defensive zone and might even score in the right situation. There’s not as much attention on him as there is on Chris Kreider, Artemi Panarin, or Mika Zibanejad. But he deserves credit for fulfilling his role on the team. He along with Reaves and Gallant have already made noticeable differences. Drury’s off season decisions appear to be moving the Rangers in the right direction. 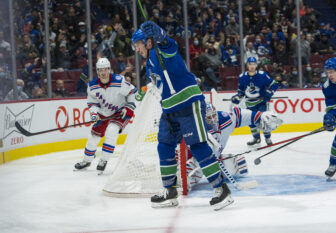 Jake DeBrusk asks for a trade, Rangers interested in J.T. Miller, and more.