Rangers Blanked By Islanders, Despite 50 Shots On Net 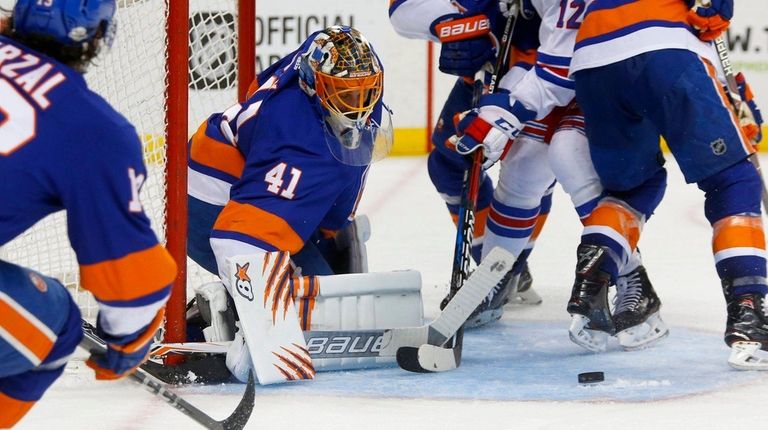 Here is our recap of the Rangers 3-0 loss to the New York Islanders.

Special Teams – One reason the Rangers lost this game was the play of their special teams. The Rangers power play was fruitless in three attempts, while the Islanders were able to convert on the power play for the first goal of the game. And with the Rangers needing a goal to get back in the game, the power play looked about as bad as it looked all season, not being able to even get set up in the offensive zone. The special teams have been good as of late but were unable to step up when the team needed it most.

Defensive Blunders – The Islanders would tack on two more goals in this one, and you could argue both of them happened because of blown coverages. The second Islanders goal came after an Islanders flurry of chances that started with a neutral zone turnover by Cody McLeod and ended with a tic-tac-toe goal for Jordan Eberle and a sprawled out Henrik Lundqvist. The Rangers had a complete breakdown in defensive responsibility on this goal and they won’t want to watch the film of this one.

“I feel like the second period, it’s a 1-0 game and we get out of that big scramble,” Lundqvist said. “We don’t get it deep and they come back and they score the second goal. That felt like the game right there.” – NY Rangers/Matt Calamia

As for the third Islanders goal, the breakdown wasn’t as noticeable, especially when you consider that all five players seemed to be in position. But, the problem was that you had those five Rangers skaters all in the same corner of the ice with nobody picking up the point men. This “puck watching” allowed the newest Rangers killer Mathew Barzal to saucer the puck to Hickey. Hickey eventually threw the puck to the net and it banked in off of David Desharnais and past Lundqvist.

Henrik Lundqvist – On two of the three Islanders goals, a strong case can be made that Lundqvist was “helpless” to prevent the puck from going in. However, the first goal was a clean shot that beat Lundqvist from the faceoff circle to the goalie’s left. Was it a bad goal for Lundqvist? Probably. Was it a really good shot by Josh Bailey? Yes. But the bigger issue for me is that the goal came on the fourth shot of the game for the Islanders. And this is something that has been going on all season for Lundqvist and the Rangers, giving up early goals to put the team behind. This is not to say that all blame here falls on the Rangers goaltender, but making a key save isn’t just about when the team is down by one in the third period. The Rangers have given up the first goal a whopping 32 times in their 58 games, and have won just nine of those 32 games. We all know the importance of the first goal, and when you are trailing early in over half of your games, it is not a sign of future success.

Fun Fact: The Rangers have had 50 or more shots against the Islanders three other times since the 2004 lockout, going 2-0-1 in those three games.

Next Game: The Rangers will look to bounce back on Saturday when they head north of the border to face the Ottawa Senators. Puck drops at 2!