Most recently, his name was brought up in conjunction with Carey Price due to a collision dating back to 2014. The Montreal Canadiens goaltender is unlikely to play this season with talks of retirement in the air.

On Sunday, the NHL released started its countdown of the 50 best players in the game and Kreider checks in at 43.

Kreider, 31, had an amazing 2021-2022 campaign for the Blueshirts scoring 52 goals (tied with Adam Graves second all-time) and 25 assists for 77 points in 81 games. Kreider also broke the team’s single-season record for the most power play goals (26) and game-winning goals (11).

“He has the ability to take over hockey games with his size (6-foot-3, 223 pounds) and speed … but I think he’s got another level at 5-on-5 to score,” Rupp said. “[The Rangers] had an awesome year going to the Eastern Conference Final and Chris Kreider was a huge reason why.”

One of Kreider’s biggest strengths is his size coupled with elite hand-eye coordination. It was a major factor to the team’s success on the power play where he caused confusion in front for goalies and defenders alike.

The veteran picked up 17 tipped goals last year, by far the league leader in that area (Dallas’ Joe Pavelski came in second with 9).

When the full list is complete, I expect Mika Zibanejad, Adam Fox, Artemi Panarin, and Igor Shesterkin to be present. 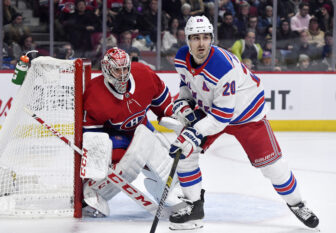 Adam Edström is a big man that tips the scales at 6-8′ frame and 225 pounds. Only prospect Matthew Rempe is bigger at 6-9′ and 240 pounds in the Rangers system.

He was selected in the 6th round of the 2019 NHL Draft and currently plays for Rögle BK in the SHL where last season he registered 9 points in 43 games.

Now the native of Karlstad, Sweden is heading to New York for the Rangers rookie camp that starts this week and regular training camp which begins on September 21.

“It will be fun. I look forward to it,” Edström said via Rogle’s website. “I just go in with the mindset of going there to show my best side. Then you’ll see how far it lasts. I’m also looking forward to playing the kind of hockey played over there. I think I can benefit from a smaller ice surface with my size and speed.”

Edström, 21, can play any forward position. In an interview with Steven Vogel posted on Forever Blueshirts in October, 2021 he provided some insight.

“I feel comfortable playing both wing and center, all I can see is a upside to my game,” Edström said. “I learned how to play both positions and feel like I can use that to my advantage in different situations on the ice”.

The expectation is for Edström to compete for a bottom six role. He will battle freshly signed Ryan Carpenter for the fourth-line center spot, but could still make the team on one of its wings.

Should he not make it out of camp, the Rangers must loan him back to his SHL team due to Article 4.2 in the MOA:

“I don’t think it’s a good idea to think too far in advance. You have to take it day by day,” Edström answered about his chances. “It’s about performing and those who perform best will get a jersey in the end. I’m just going to go there with the attitude to do my best every day. If anything, it will be a very good lesson for the future.” 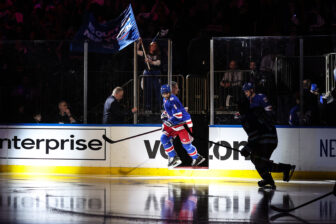