The New York Rangers extending Ryan Strome is starting to become a matter of when and not if.

Last night, he and Artemi Panarin both collected one goal and two assists to lead the New York Rangers to a 3-2 victory over the Chicago Blackhawks, extending their winning streak to six games.

One thing has been clear from the moment the two lined up as line mates three seasons ago, they work well together.

“I haven’t noticed it,” Gallant joked when asked about their chemistry. “It’s great. It’s awesome. They look for each other. They’re good friends. There’s nothing better than have to chemistry. It’s same with Kreids and Mika.”

On the game-winner by Panarin, they were buzzing for what felt like a solid minute. As the Hawks chased them around the ice, Strome’s mind-reading backhand pass to a wide-open Panarin led to a slam dunk goal.

“I think we work together pretty good and there’s good energy in the locker room, off ice too,” Panarin said of Strome. “Good friends. We respect each other. Then coach gives us confidence too.”

It’s become a symbiotic relationship where two excellent hockey players that don’t even speak the same first language are always on the same wavelength.

“I know the ins and outs of how he’s feeling. I can judge by his answers how he’s feeling, even if he won’t admit it,” Strome said of Panarin. “We’ve been playing real well and he had extra motivation against his old team.”

This season, Panarin leads the teaming scoring with 26 points in 23 games. His center, Strome has 18 points in 19 contests. However, Strome has been hot with 14 points in his last 11 games.

Recently, Larry Brooks of the NY Post is reported that the Rangers and Ryan Strome had begun to discuss a new contract.

The Post has learned that president-general manager Chris Drury and the pending unrestricted free agent center’s representatives have begun to engage in talks aimed at maintaining the Strome-Artemi Panarin connection well beyond this season.

This is great news and I have long been an advocate to for keeping Strome. His chemistry with Artemi Panarin is undeniable and he’s proven to be every bit as offensively talented as most second and even first line centers.

The Rangers are cap crunched in 2022-23 and have to plan for Kaapo Kakko’s next deal this summer. They also have to reserve money for Alexis Lafrenière and K’Andre Miller in 2023-24. If Strome is willing to sacrifice money for security, maybe something can be done. He will turn 29 in July so the Rangers must also be careful with the number of years.

Strome is making $4.5M on his current deal and any new deal over $6M will hinder the Rangers cap maneuverability. That could make them prone to an offer sheet.

One source tells me if the term is right, Strome may accept $5.75M. This is going to be a very interesting negotiation but if there was ever a player that may take a deep discount, it could be Strome.

“I love being a Ranger, I think I fit in great here,” he said during training camp about his contract status. “I love the guys on this team and care so much about those guys. Whatever happens, happens. Everyone is really excited (about this season), and that’s my focus.” 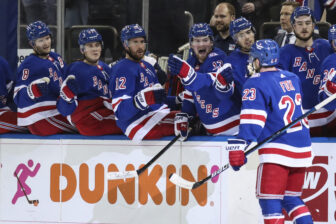 Another heaping offering of Sunday NHL Rumors! How do the Bruins value Debrusk? The Stars are offering up Khudobin, and more!