Rangers opt to keep a healthy Filip Chytil out of the lineup, raises trade questions

The New York Rangers lost a coin-flip game against the Pittsburgh Penguins on Saturday. Aside from the 1-0 outcome, the contest felt like a playoff game, which the Blueshirts did not wilt in.

Instead, they rose to the occasion, outshooting and out-hitting a seasoned Penguins team that plays hard every night.

“The longer the game went 0-0 it felt like a playoff battle,” Gerard Gallant said. “It’s about playing a complete game and that’s two in a row where we played good teams and played 60 minutes.”

New York held a slim 27-26 advantage in the shutout loss, but one wonders if maybe having another offensive weapon in the lineup would’ve helped.

Kaapo Kakko remains on IR with an upper-body injury, in spite of that, Filip Chytil was healthy enough to play and Gallant opted to stay with Morgan Barron.

“He was fine,” Gallant answered about Chytil’s health. “Just the team played really well the night before (against Washington).”

While the reasoning makes sense, it does make you wonder just where Chytil’s future is heading. Any reasonable person would ask this question. Does anyone think that the moment Kakko is deemed healthy to play, that Gallant wouldn’t immediately insert him back into the lineup and scratch Barron?

Despite talks that Chris Drury may deem Chytil as someone he’d rather not trade because the team does not have many centers, I believe he is very much on the block for the right deal. I expressed as much over at The Daily Goal Horn where I placed him on our NHL Trade Bait Tracker along with three other Blueshirts.

The situation becomes even more eyebrow raising if you listened to the head coach explain why he moved Greg McKegg to center during the last two games.

McKegg is solid defensively and his career 49.4% on draws makes him look like Hall-of Fame center Guy Carbonneau compared to Chytil’s 40.2%. Unfortunately, the 29 year-old is averaging just .13 points per game and can’t help the Rangers 5v5 scoring woes. Even more unfortunate is the fact that Chytil isn’t doing much better this season at .29.

That’s why it wouldn’t surprise me if the Rangers make two moves at the trade deadline. One to bring in a top six winger and another for a third line center that can play a solid two-way game.

In order to do that, the Rangers will likely need to make room and Chytil is a logical trade chip. With the trade deadline less than a month away (3/21), we will soon find out where the 2017 first round pick stands in the organization.

Chytil being packaged to the Canucks for a player like J.T. Miller makes complete sense to me. He could also be moved for the rental forward if Tomas Hertl and the Sharks can’t come to terms.

The bottom line is Chytil’s runway with the Rangers may be running out. Whether a trade happens at the deadline, draft, or possibly next season seems inevitable unless he starts scoring. 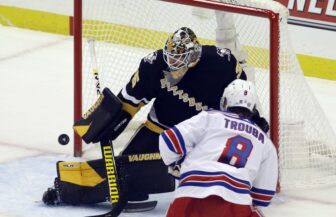 Check out the latest NHL Trade Bait List as the March 21st Deadline draws near. Check it out here.