The New York Rangers could have a hand in deciding their first round opponent. One thing that’s clear for them is home-ice advantage whether they face the Pittsburgh Penguins or the Washington Capitals.

Another thing also seems to be understood based on comments after Wednesday’s 4-3 loss to the Canadiens is that they want end the season with a win. New York has lost three straight.

“We always want to win,” Alexis Lafreniere said heading into the team’s final game against the Capitals. “Washington is a good team too, so they’re going to come here to win. It’s our last game before the playoffs so we’ll try to end the season on a good note.”

Coming into Thursday’s contest between the Capitals and the New York Islanders, the Penguins have 101 points. Washington is at 100 with this being their game in hand.

No matter what happens tonight, there will be a level of scoreboard watching for Friday night. Both teams are in action at the same time as the Penguins face the Blue Jackets at home and the Caps are in town to meet the Rangers.

Before we get into the scenarios to determine the Rangers first-round opponent, it’s important to note that the Penguins own the tiebreaker with 36 regulation wins to the Capitals 35.

Rangers head to head versus Penguins and Capitals

Heading into the last game of the season, MoneyPuck has the Penguins at a 31.5% chance of taking third place. They are 4-5-1 in their last 10 games and have lost two straight going into their final game against the Blue Jackets.

The Rangers played Pittsburgh extremely well this season, with their only loss coming in Pittsburgh by a score of 1-0. Igor Shesterkin started all four games and posted a stunning save percentage of .960 with a GAA of 1.01 and a shutout.

On the injury front, Penguins #1 goaltender Tristan Jarry is listed as week-to-week with a foot injury.

The Capitals have been closing the points gap since beating the Penguins 6-3 on April 9. Thanks to a 6-2-2 stretch they are one point behind the Penguins with a 68.5% to take over third place.

This season, the Rangers and Capitals split their only two games heading into tomorrow’s regular season finale. Alexandar Georgiev played in the loss in the season opener, but Shesterkin was stellar in his one start with a .973 SV% allowing just one goal.

On the injury front, Alex Ovechkin took a hard crash into the board and looked like he injured his shoulder. He is being labeled day-to-day but missed the team’s last game, which was a loss to the Islanders (their opponent tonight). 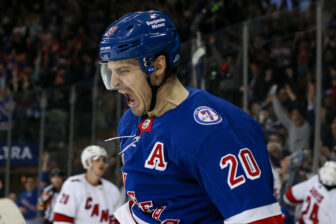