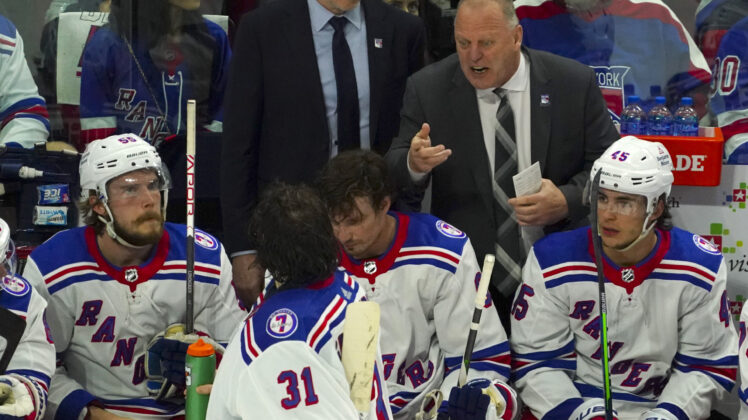 May 20, 2022; Raleigh, North Carolina, USA; New York Rangers head coach Gerard Gallant talks to goaltender Igor Shesterkin (31) from the bench against the Carolina Hurricanes during the second period in game two of the second round of the 2022 Stanley Cup Playoffs at PNC Arena. Mandatory Credit: James Guillory-USA TODAY Sports

The New York Rangers have scored just one goal through the first two games of round two against the Carolina Hurricanes.

That came during the first period of Game 1 off the stick of Filip Chytil set up by Alexis Lafrenière. Since then it’s been crickets with the top six forwards struggling mightily.

Chris Kreider and Artemi Panarin, despite several power plays were each held without a shot on goal Friday. Kreider posted a career-high 52 goals during the regular season and not having a shot on goal almost seems criminal.

Here’s a breakdown of how the top six has fared through two games against the Canes:

There’s no doubt that these players need to do more, but head coach Gerard Gallant is not laying any blame at their feet.

“I don’t just judge [the game] on our guys. [Carolina] had 9 chances and we had 5 or 6,” Gallant explained. “It was a defensive battle. So I’m not going to blame our guys for not creating scoring chances. Their guys didn’t have a whole lot either. Would I like more chances? Of course I would. But we played two pretty good hockey games in there. I want more offense from our top players…we need to find a way to get a little bit more.”

Gallant is most certainly having his team focus on defense, Artemi Panarin said as much on Friday.

“[It’s] not feeling great, but sometimes you have to do that. It depends on the situation in the game. If you are losing a few-nothing, you have to start playing like you normally do. I would love to do some stupid s–t on the blue line, but I can’t.

“I feel bad for Turk,” No. 10 said in reference to head coach Gerard Gallant. “He’s nervous, he’s got a nervous system.”

At some point, Gallant may need to allow a little more free rein for his most creative players.

As the scene shifts to Madison Square Garden for Games 3 and 4, New York Rangers fans believe the team can tie it up.

I ran a poll on Twitter with over 1200 votes at the time of publishing this article. Of those who responded, 50.6% of fans believe the Rangers can even up the series. Only 25.1% of fans feel the series is over with another 24.3% still unsure.

“Hopefully we can use the home crowd to our advantage,” Kevin Rooney said Saturday. “Our home crowd has been the #1 star for us this playoffs. They’ve been awesome for us.” 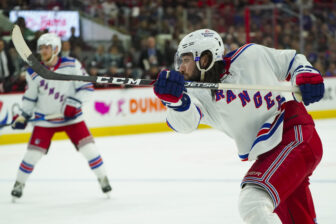