New York is already in Montreal for their game against the Canadiens tonight. It’s possible one or two of the Rangers’ forwards is under the weather or nursing an injury. Filip Chytil was reportedly not feeling well in his last game.

Rydahl signed a one-year, one-way contract over the summer as a free agent out of the SHL. It should be noted that he is waivers exempt.

In his four preseason contests, he registered an assist and picked up two shots and was one of the late cuts in camp. Last season for Färjestad BK of the Swedish Hockey League, he recorded 15 goals and 15 assists for 30 points.

That time appears to have come from the big Swede, who tips the scales at 6-3 and 201 pounds. The veteran can also play center or wing and can kill penalties.

The New York Rangers are now back to the max roster limit of 23.

New York Rangers prospects Brennan Othmann and Jaroslav Chmelar will face each other in the final of the 2023 World Junior Championship on Thursday night.

The two players have a bit of history with each other dating back to the 2022 tournament’s preliminary round when Chmelar crunched Othmann from behind. It left both players shaken up with Chmelar being ejected from the game.

Afterwards, the Chmelar reached out to Othmann in order to make amends.

“I texted him and he said there are no hard feelings,” he said. “At the next Rangers camp I will buy him dinner and we will be fine”

Well we’ll see how fine things are after Czechia and Canada battle for Gold. Puck drop is slated for 6:30 pm et and will be broadcast on NHL Network.

Canada roared back on the US with six unanswered goals en route to a 6-2 victory and a chance to repeat as champions. Othmann did not register a point in the match and has 2 goals, 2 assists, for 4 points in six games to date.

Othmann, 19, was selected in the first round of the 2021 draft. He has 13 goals and 35 points in 26 games split between the Flint and Peterborough of the OHL. At the 2022 WJC, he registered 6 points in 6 games to help Canada capture Gold.

Czechia advanced to the final in a thrilling 2-1 overtime win over Sweden. In that match, Chmelar didn’t register a point. In six WJC games, he has 3 goals, 2 assists, for 5 points.

Chmelar, 19, was selected in the 5th round of the 2021 Draft. This season, he has 6 goals and 10 points in 18 games with Providence of the NCAA. He registered a goal in three games at the last tournament held in August. 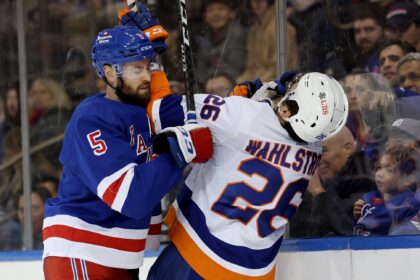 Also Read:
Rangers lucked out with Ben Harpur, is he in line for an extension?