The New York Rangers will go back to their starting goaltender Igor Shesterkin against the Blues in St. Louis tonight.

You can dive deeper into the matchup plus get info on how to watch, stream, and listen here.

This is game 3 of the team’s four-game road trip that will conclude on Saturday night in Dallas when they face the Stars. New York is 1-1 thus far and have won 4 of their last 8 road games.

The Rangers netminder is on pace to set a new single season record for SV% which was set back in 1970-71.

Toronto Maple Leafs goalie Jacques Plante established the highest mark ever SV% for goalies with a minimum of 30 games played that season at .944, which he did in 40 games.

There’s been some talk lately about Rangers defenseman Adam Fox and the possibility of wearing him out this season. The premise seems odd to me, especially when you consider he is just 24 years of age and averaging 24:19 TOI this season, which is down about 23 seconds from his Norris Trophy winning season in 2020-21.

For some context, the NHL’s top scoring defenseman, Colorado’s Cale Makar is averaging over 25 minutes. As are Tampa’s Victor Hedman, and Nashville’s Roman Josi. All three are in the Norris Trophy race.

Apparently, a poor game against the Wild seemed to spark these concerns, disregarding his 6 points in the previous 4 games it seems.

“You can’t be at your best every game,” Gerard Gallant explained. “Even when he plays an average game in everybody’s eyes, he’s still doing real good things for us. Everything was smooth for him, but this is a little bump in the road.”

Fox is the Rangers leader in TOI, but a lot of those minutes are also on the Rangers PP which is a lot less strenuous than say the PK. Remember, Gallant will often give his #1 unit almost the full 2 minutes of every man advantage.

“He plays a lot of minutes for us,” Gallant continued. “Our medical staff and our off-ice conditioning staff, we talk with him all the time and make sure he’s doing the right things. He said he feels great, so we’ll monitor game by game like anybody else.”

Adam Fox himself didn’t seem overly concerned and talked about his own responsibility to manage minutes.

“Everyone wants to be on the ice for the whole game. But in the long run, it’s not maybe the best thing,” Fox said. “I want to be out there. It’s just managing and picking your spots also helps, and managing the game too.”

Fox is certainly right about thats, but at the same time, this really appears to be much ado about nothing. 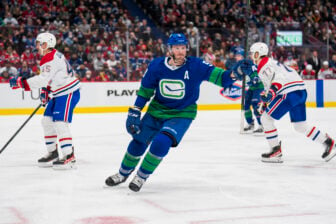