The New York Rangers officially will only have four picks going into the 2022 NHL Draft taking place on July 7th through the 8th in Montreal.

Vince Mercogliano of USA Today confirmed that the Winnipeg Jets have decided to take the Rangers second round pick acquired in the Pavel Buchnevich trade to complete the terms of the Andrew Copp deal.

When the Rangers reached the Eastern Conference Final, Chris Drury lost his only first-round pick in the upcoming draft. That was one of the two conditions pertaining to the two second round picks that were part of the Copp trade.

The full trade was as follows:

New York had two second round picks in 2022 when they acquired one from the St. Louis Blues along with Sammy Blais for Pavel Buchnevich. That pick now belongs to the Winnipeg Jets as agreed to in the trade.

Here’s where the Rangers will be picking barring any other trades:

The Rangers AHL affiliate announced on Monday the signing of defenseman Louka Henault.

HARTFORD, CT – The Hartford Wolf Pack has announced that the club has agreed to terms on a one-year, standard AHL contract with defenseman Louka Henault for the 2022-23 AHL season.

Henault, an undrafted free agent, joins the Wolf Pack after four seasons in the Ontario Hockey League (OHL) with the Windsor Spitfires. In addition, Henault spent the 2020-21 season in Finland.

Henault, 21, picked up 65 points in 63 games in the OHL. He was a teammate of highly regarded Rangers prospect Will Cuylle.

This past season, Cuylle and his Windsor Spitfires came up just short in their quest for an OHL Championship. The Hamilton Bulldogs became the 2022 J. Ross Robertson Cup Champions by beating the Spitfires in 7 games.

Cuylle, 20, did not record a point in the Game 7 loss but was outstanding as the captain of the Spitfires. In 50 regular-season games he posted 43 goals and 80 points. He added another 15 goals and 31 points in 25 playoff games.

He’s expected to join the Wolf Pack next season.

The Rangers have invited Swedish born forward Carl Berglund to their upcoming Development Camp in September.

In 33 games with UMASS Lowell in the NCAA, he recorded 9 goals and 19 assists for 28 points. For his college career of 78 games over three seasons, he’s registered 24 goals and 62 points. In his freshman year he was named the team’s rookie of the year. 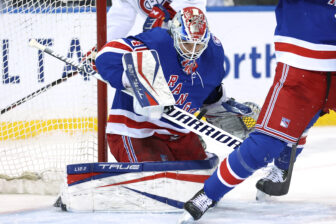