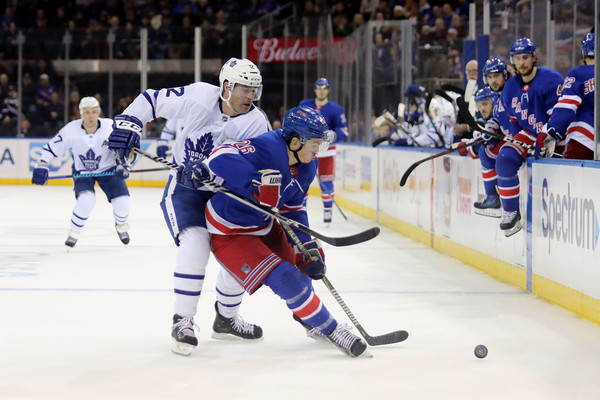 Fresh off the All-Star break, the Rangers return to action and will take on the Maple Leafs tonight at MSG.The Rangers won their last contest, defeating San Jose 6-5 in a barn burner of a contest. New York is currently sitting on the outside of the second Wild Card spot in the Metropolitan division and have only won one game in their last four contests. Toronto comes into town after smashing the New York Islanders 5-0 in Toronto last night. The Maple Leafs are winners of their last three contests and currently sit third in the Atlantic division with 63 points. The last matchup between these two teams was a 3-2 Maple Leafs win at MSG on December 23rd.

Tonight begins the last half of the season for the Rangers. From now on, every game and every point will matter even more for the Blueshirts. After a strong effort last week against San Jose, the Rangers seem to be ready for the challenge of what’s to come in the next few weeks.

“It’s our push to the playoffs. That’s really what it is,” said J.T. Miller, who entered the All-Star break with a bang with a goal and two assists in the team’s 6-5 victory over the Sharks in San Jose on Thursday. “It’s going to be tight and it’s not going to be easy to get in. We know that every year. We have a lot of good teams fighting for a couple of spots in the playoffs. You can’t try and get in in one game; you’ve got to worry about this week and go from there.”

“It’s good to get that win before the break and kind of get away from the game, recharge and come back and start playing our best hockey,” said Smith.  Matt Calamia/NYR.com

“Bring some energy and the physical part and … whatever I can do to help the team.” Forward Cody McLeod practiced Tuesday and is expected to make his #NYR debut Thursday against Toronto. https://t.co/ulsBnnbkR4 pic.twitter.com/6mnbdZ2aR7

Newly acquired forward Cody McLeod practiced with the team on Tuesday and will be in the lineup for the Rangers tonight versus Toronto. McLeod takes the spot of Vinni Lettieri, who was kept in Hartford after the All-Star break.

Chris Kreider and Kevin Shattenkirk were at the team’s practice facility yesterday. Kreider participated in some light skating, while Shattenkirk, who was on crutches, was doing upper body conditioning in order to stay in shape. Their progress will still be day-to-day but it is incredibly encouraging to see them beginning to ramp up the process of their eventual returns.

AV said @shattdeuces and @ChrisKreider were in the building today. While rehab hasn't begun, Shattenkirk did begin maintaining his upper-body conditioning, while Kreider did a light skate by himself. "Day-by-day and following the process they've been told by the medical staff."

Consistency In All Ends Of The Ice – Although the Rangers won their last contest against San Jose, the Rangers did not put out a full sixty-minute effort. On certain goals, the Rangers seemed out of place and the defensive zone coverage was lacking horribly, which allowed San Jose to take advantage. Offensively, though they kicked it into gear late, the team needs to have a stronger effort throughout the game. The Rangers third period effort against San Jose is what the Blueshirts can bring to the table, and this effort needs to be presented throughout the game, spread out through all sixty minutes.

Toronto is an incredibly strong offensive team, with Auston Matthews leading the way, as he leads the Leafs in points. Now with Kevin Hayes returning from his injury last game, they will need to push the pedal down on Toronto on both ends and keep a tight, consistent defensive effort, with bursts of offense to match that defensive effort versus Toronto.

Cody McLeod – Although initial fan reaction was not warm, Cody McLeod was brought to the Rangers organization to bring grit and toughness to a roster that sorely needs it. Whatever intangibles the Rangers see in him, they hope he can add to an incredibly talented roster. Some may question his ability to keep up with the speedy players on the team, but he seems to have kept up over the last few seasons, as he’s stuck around on teams such as Nashville and Colorado. The Rangers hope his physicality and toughness, along with veteran leadership, can pay off in some way as they look to try and edge out the Maple Leafs tonight at MSG.