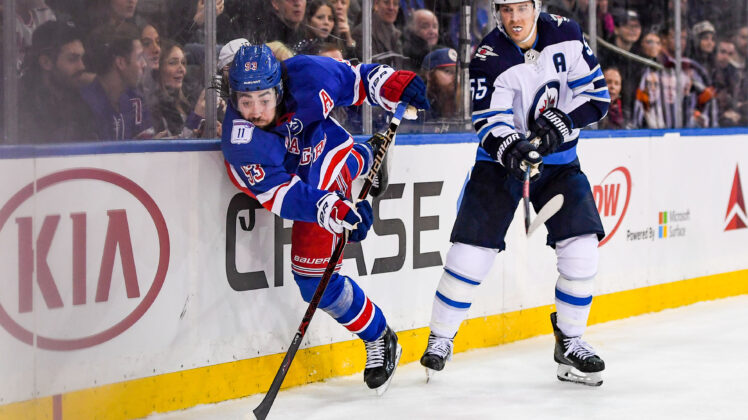 The New York Rangers overcame an early two-goal hole to pick up a 7-4 victory over the Dallas Stars on Saturday night.

Thanks to Artemi Panarin picking up his third career five-point night, the Rangers split a four-game road trip. His center, Ryan Strome capped the comeback with an empty-net goal as the Blueshirts scored seven goals for the second time this season.

Most importantly, Igor Shesterkin who was pulled in the last game against the Blues, settled down from the rough start and made 29 saves.

Head coach Gerard Gallant was looking for a better effort from his team in Dallas. Playing a desperate team, he wanted his team to respond accordingly.

“We’ve got to play better and hard. We have to compete more for pucks and win more one-on-one battles,” Gallant stressed before the game. “We’ve given up too many chances and haven’t created enough. Dallas is a playoff bubble team and they’re playing desperate hockey and I would like to see that from my team.”

Last night, the Rangers still gave up more high danger chance against than for by a 14-9 margin. It was slightly better than the team’s last two games against the Wild and Blues (28-21 against).

“They’re a real good forechecking team, that’s what they do real well,” Gallant said. “I thought we were tighter. We were more compact in the [defensive] zone. We talked about, ‘Stop giving up these 20 chances a game.’ You can’t win and be successful doing that. I thought we got to more pucks, we were first on pucks more. There was support when we got the pucks, so we didn’t spend as much time in our zone as we did the last two games.”

New York Rangers second line center will be a pending UFA this summer. The team has already decided they will not trade him at the deadline even if no extension is in place before March 21. With the team heading to the playoffs, it makes sense to hold on to him and see what happens before the NHL Draft in June.

NY Post’s Larry Brooks latest Slap Shots column proposes that the team hold on to big assets like Nils Lundkvist in order to possibly acquire Strome’s replacement if he can’t be re-signed. He also offers some potential targets.

That is because if Ryan Strome does not sign an extension by March 21, the Blueshirts are going to need all those chips over the summer to trade for a second-line center, with both Winnipeg’s Mark Scheifele and Vancouver’s Bo Horvat primary targets and Chicago’s Kirby Dach a secondary person of interest.

Let me start off with Kirby Dach being a highly unrealistic option. The Chicago Blackhawks are rebuilding and the 21 year-old they selected third overall in 2019 isn’t going anywhere.

Canucks center Bo Horvat, a 26 year-old with one year left on a deal worth $5.5 million is probably going to be extremely costly to acquire. Unless Chris Drury can secure an extension, giving up key assets makes no sense to me. Plus, since 2020-21 he’s averaging just .69 points per game.

If there is an intriguing option listed it’s without a doubt Mark Scheifele. The 28 year-old has two more seasons on his contract with an AAV of $6.125 million. This season, he’s registered 50 points in 53 games and would be an actual upgrade over Strome.

Patrick Kane with the Avalanche or Rangers next season? Plus the latest trade talk here.