The New York Rangers have had an unexpectedly successful start to the season. They are currently 17-5-3 for 37 points and .740 points percentage. They’ve begun to establish an identity and they’re working towards a clear goal – the playoffs.

Being without Igor Shesterkin the last few games facing a back-to-back with Chicago and Colorado has been a test. The Rangers are certainly making progress, but still have to continue to prove themselves.

After Shesterkin went down with an injury against the San Jose Sharks last Friday, Alexandar Georgiev stepped up in a significant way, making nine saves on nine shots in that game to complete the shutout. He then continued to play well in the home and home against the Chicago Blackhawks on Saturday and Tuesday. He allowed two goals in each of these games and started to look more like the Georgiev we’re used to seeing.

Georgiev had a rough start to the season with Shesterkin getting the overwhelming majority of the playing time. His save percentages in the first two games he started this season were .889 against the New Jersey Devils and .778 against the Buffalo Sabres. But, his save percentage in each of his last two starts have been above .920. That’s obviously a much better place for his numbers to be.

It was necessary for Georgiev to step up in Shesterkin’s absence. Though the Rangers’ defense has improved, they still rely heavily on their goaltender. It was apparent that Georgiev was struggling with confidence, and decreasing his playing time didn’t help. But now that he’s had a chance to get back in net consistently, he looks more comfortable and is undoubtedly playing better.

Next man up mentality and the Rangers’ identity

Georgiev has set a clear example of this often heard “next man up” mentality. The rest of the team must be ready to step up at any time. Successful teams don’t suffer substantially when they’re missing a player or two. If the Rangers want to contend and compete with top teams, they’re going to have to uphold the “next man up” mentality in the event that someone gets injured.

After the Rangers’ win over the Blackhawks on Tuesday, Mika Zibanejad expressed in his press conference that the team’s identity is becoming clear. “I think by now you should know how we play,” he said. “And that’s good for our group.”

Part of Chris Drury’s plan for the Rangers was for everyone to find their roles and to establish an identity. They are making progress is this area. They’ve become tougher and have started getting grittier goals instead of always finding the perfect play. Off season decisions are proving useful in establishing identity but it needs to be maintained for 60 minutes every night.

Plenty of people are surprised by the Rangers’ fast start and are skeptical of this still fairly young team. Just check some of the power rankings around the league.

Losing 7-3 to Colorado on Wednesday night shows that these skeptics may have a point as many question their “easy” schedule. However, the Rangers were playing in the second game of a back-to-back in which they had to travel from Chicago to New York and landed at 2:30 AM.

Gerard Gallant did throw Adam Huska into his first NHL against a high powered Avalanche offense. These were certainly real factors in the loss, but there were other issues as well. Issues that probably could have been better controlled.

The first concern was soft defense with the Rangers doing too much stick checking and not taking the body enough. Stick checking is never going to be enough to suppress Colorado’s offense. The Rangers are going to have to play tougher defense if they’re going to compete with top teams in the league, especially in the playoffs should they make it.

As previously acknowledged, the team had to travel from Chicago to New York so there was some fatigue. However, it can’t be ignored that their game was generally sloppy and seemed to even lack effort at times.

There’s going to be tough stretches of games, and the Rangers have to learn how to handle them. An NHL season is an endurance test. As the team continues to improve and the younger players continue to develop, physical and mental stamina is going to be paramount. The organization has sights set on the playoffs which is whole other test in and of itself. 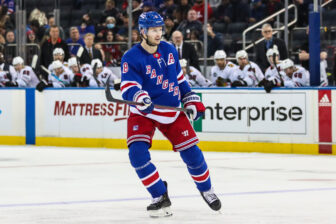 Overall, the Rangers need to prove that their 17-5-3 start is not a fluke. In order to do that, they must show that they can compete with the league’s best. The game against the Avalanche did not help their case, but there were many factors involved in that loss, some of which they couldn’t control.

The Rangers in unison said they put that game behind them and feel it’s a one off. But until the Rangers can show that they can consistently keep up with the league’s best, there are going to be skeptics.