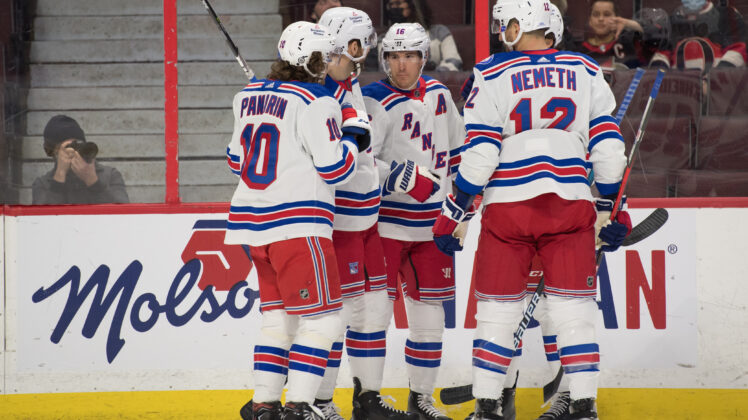 While the New York Rangers may be 2-0-1 since returning from break, there have been some concerns about their offensive game.

Mostly, these issues point to some of their youth and the stage they’re at in their development. But the Rangers will need to address these issues before the playoffs if they want to make a meaningful run and prove they can compete.

A problem plaguing the Rangers for most of this season is not playing a complete game. Early on, they often got off to good starts but didn’t maintain pace throughout the game. That began to shift well before the break so that they were starting slowly and taking too long to find their legs. This was the case against Boston and Detroit. The Rangers were able to defeat Boston in a shootout but lost to Detroit, also in a shootout.

This inability to play a full 60 minutes points to the Rangers’ relative immaturity as a team. For how young they are, they’ve been surprising and have often looked like a seasoned team that has been playing as a group for years, but in reality this is a relatively new group.

Prior to playing Ottawa on Sunday, Gerard Gallant spoke about slow starts being part of the mental aspect of the game that the Rangers need to get past. Against Ottawa, they were still outplayed for most of the first period but were able to get going late in the first and wound up winning 2-1 in regulation.

“Our offense is good enough to win, that’s about it,” Gerard Gallant admitted. “I don’t think we’re playing our best game yet due to the long break. We played good shutdown hockey and it’s nice to win those type of games too. But we can bring more offense for sure.”

The Rangers went into the break coming off of a satisfying 4-2 win over the Florida Panthers. But both of their wins since returning were by very narrow margins. The team has had some shaky moments in all three games since returning. Initially, it seemed like a rest versus rust situation where the long layoff certainly had an impact.

In order to contend, teams must be able to compete under a wide range of conditions including coming off of breaks. Taking three games to return to form isn’t ideal but it has been impressive that they continue to find ways to win.

Much of the Rangers’ success this season can be largely attributed to Igor Shesterkin’s incredible goaltending, solid defense, and consistent offense from the top six. The Rangers are a more complete team than they’ve been in recent years, a product of the Jeff Gorton rebuild. However, contributions from the bottom six are still lacking.

The fourth line has been more successful than the third. No one is expecting the fourth line to go out and score multiple goals a night. They’re expected to play a physical game a send a message. They’ve done that for the most part being led by Ryan Reaves who was brought aboard for precisely that purpose. He has 181 hits on the season so far.

Playing Greg McKegg on the fourth line does raise questions. For the time that McKegg has been in the lineup, he has not made a noticeable impact. The younger Morgan Barron with plenty of potential deserves a chance. Kevin Rooney is more than capable of playing the wing. It’s time for Gallant to give Barron a look at the fourth line center position with Reaves and Rooney on the wings.

The third line sees some glimmers of success every now and then, but not nearly often enough. Filip Chytil may have been held back by injury for some time leading into the break. However, this is his fifth year with the Rangers, and he has never recorded more than 23 points in a season. This is underwhelming for a player who was revered as a top prospect for the organization. The Rangers may have a better time playing him more often on the wing. Now that he is healthy, a change needs to be made to spark more production from him.

“It might change tomorrow morning if we sit in the coach’s room too long and look at our board. It’s a work in progress,” he said. “With Kaapo (Kakko) being out a little, you move things around and I wanted to make a change for tomorrow.”

Julien Gauthier and Dryden Hunt both looked promising at the beginning of this season. Thye have both been moved up and down the lineup but struggle to produce. Hunt has nine points on the season, and Gauthier has six. Successful playoff teams have third lines that put up more points than the Rangers’ third line is currently putting up. With the upcoming trade deadline, Chris Drury should consider improving the third line a priority.

Progress has been made but the process continues

Something that has been made clear is that the Rangers have improved significantly this year but still have to mature. There have been times where they’ve looked like a mature team, but not playing a complete game and narrow wins are signs of a team with work to do.

The Rangers will make the playoffs, and that will be the real test. But there are some issues that need to be addressed before then.