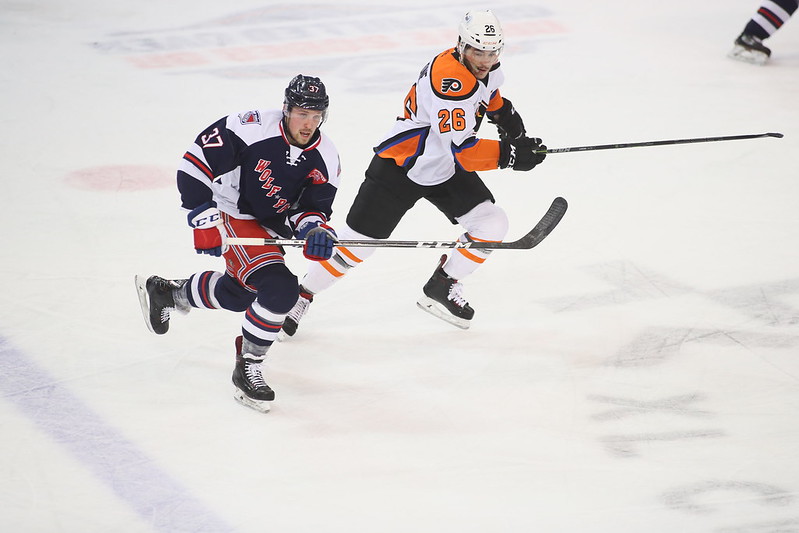 The 21-year-old prospect completed his first full season in the professional ranks, skating in 68 games with Hartford and tallying 18 points (9G, 9A). From what I have witnessed, the prospect has potential to become a good player for the Rangers down the road. His development is off to a good start as not everyone’s first year in the American Hockey League goes easy.

As Gabriel Fontaine entered training camp, he impressed Chris Drury and Keith McCambridge with his assets and what he is able to provide for Hartford.  The forward had a great training camp and was eventually given a bigger role as the season progressed.

One strong aspect of the prospect’s game is his high Hockey IQ. He is able to read plays well and adapt efficiently. He knows how to play the boards and what to do in high-pressure situations. In addition to his intelligence, the forward is great on the penalty kill. He is able to defuse huge moments in the game where the penalty kill is at a critical point in the games.

Another asset I noticed is his discipline. The forward had one penalty throughout the season. He is able to compete and play smart. He knows where his stick is at all times and will not give opponents any opportunities to go on the man-advantage. Instead, Gabriel Fontaine will give Hartford power play opportunities with his speed and quickness, throwing off opponents.

The prospect still has learning to do, however, he is on a solid track for the Rangers. To me, Gabriel Fontaine is an upgraded version of Ryan Bourque, where both players bring quality to the defensive aspect of the game, can contribute offensively, and play with heart. Gabriel Fontaine has the edge since his potential ceiling is higher and he is able to have a strong and well-rounded two-way game. We know offensively that he could be lethal, as we saw when he put up seasons of 45 points and 52 points with Rouyn-Noranda Huskies in the QMJHL before joining Hartford. The difference is that the competition is harder. That should not worry the prospect, as he should take the tougher situations in stride. He could produce a good amount of points for Hartford down the road as he improves his overall game.

Gabriel Fontaine is exciting to watch form a fan’s perspective. You will notice him in games when it comes to the penalty kills or in the defensive end. Another bonus is that he is a center.  He could have a more expanded role next season with Hartford. The prospect will look good in the Rangers uniform in the future if/when he earns a call up or a roster spot. The only question is when Rangers fans will be able to fully enjoy his playing style and what he brings to the table.