Rangers remember legend Guy Lafleur who passed away at age 70

The New York Rangers remembered one of their own today as Guy Lafleur passed away at age 70.

Lafleur was one of the all-time greats who was inducted into the Hockey Hall of Fame in 1988. He was part of the Montreal Canadiens dynasty in the 1970s that won five straight Stanley Cups. His accolades also include 3 Art Ross Trophies (Points Leaders), 2 Hart Trophies (MVP), 3 Ted Lindsay Awards (NHLPA Outstanding Player), and 1 Conn Smythe (Playoff MVP).

“The New York Rangers are saddened to learn of the passing of hockey legend and former Blueshirt Guy Lafleur,” they wrote in a statement. “Our thoughts are with Guy’s family, loved ones and friends as well as the entire Montreal Canadiens organizations as we mourn the loss of one of hockey’s greats. Guys was admired and adored by many and he will be greatly missed.”

It had been four years since he left the Montreal Canadiens. However, the chants of “Guy” as he flew down the ice with his blond hair flowing in the breeze were still echoing in his head. The game was calling to him and there was a team ready to take him on– the New York Rangers.

”When I left Montreal, I was kind of fed up with the game,” he said about his return. ”But then I started to enjoy the game again, and I wanted to give it a try before I got too old.”

During the 1988-89 season, the freshly minted hall of famer signed with the Blueshirts for one last hurrah. In 67 games, he scored 45 points with 18 goals showing the hockey world he still had some juice left in his tank.

His most memorable moment that year came when he returned to the Montreal Forum on February 4. In front of an adoring crowd, Habs fans gave him a standing ovation that seemed to last forever.

Lafleur did not disappoint on that night scoring two goals and adding an assist in a 7-5 loss for the Rangers.

Guy went on to play two more seasons with the Quebec Nordiques before calling it a career. 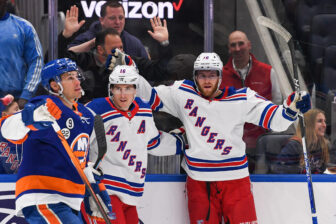 Also Read:
Some concern for Andrew Copp after exiting with lower-body injury in Rangers win

“We are deeply saddened to learn of the death of Guy Lafleur,” Canadiens owner Geoff Molson said in a statement. “All members of the Canadiens organization are devastated by his passing. Guy Lafleur had an exceptional career and always remained simple, accessible, and close to the Habs and hockey fans in Quebec, Canada and around the world. Throughout his career, he allowed us to experience great moments of collective pride. He was one of the greatest players in our organization while becoming an extraordinary ambassador for our sport.

“Guy Lafleur is part of the Canadiens’ family and the organization will provide all the necessary support to the members of his family and his close circle of friends during this extremely difficult time. On behalf of the Molson family, and all members of the Club de hockey Canadien organization, I extend my deepest sympathies to his wife Lise; his sons, Martin and Mark; his mother, Pierrette Lafleur; his granddaughter, Sienna-Rose; and his sisters, Lise, Gisele, Suzanne and Lucie.”

Commissioner Gary Bettman also released a statement on behalf of the NHL regarding the six-time All Star.

“You didn’t need to see Guy Lafleur’s name and number on his sweater when ‘The Flower’ had the puck on his stick,” Bettman said. “As distinctively stylish as he was remarkably talented, Lafleur cut a dashing and unmistakable figure whenever he blazed down the ice of the Montreal Forum, his long blond locks flowing in his wake as he prepared to rifle another puck past a helpless goaltender — or set up a linemate for a goal.”