Rangers Roundup: A win for Teddy, tough at home, and more 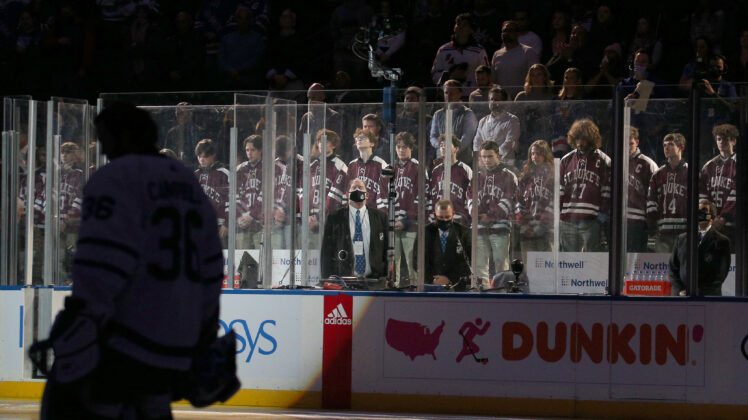 Jan 19, 2022; New York, New York, USA; St. Luke’s High School hockey players stand for a moment of silence to honor their teammate, sophomore Teddy Balkind, who died earlier this month during a game in Connecticut. Balkind was honored with a moment of silence before a game between the New York Rangers and the Toronto Maple Leafs at Madison Square Garden. Mandatory Credit: Brad Penner-USA TODAY Sports

The New York Rangers played some inspired hockey after a “sluggish start” as Ryan Strome put it against the Maple Leafs.

Before the game, the team honored Teddy Balkind, by hanging his jersey on the glass by their bench. They also wore a #5 Balkind Rangers jersey to show respect to the young man, who lost his life so tragically.

Teddy Balkind, was a sophomore at St. Luke’s School in New Canaan, Ct., died earlier this month after he fell to the ice during a junior varsity game at the Brunswick School in Greenwich, Ct. Another player was unable to stop and collided with Balkind, cutting his neck with his skate.

Balkind was taken to Greenwich Hospital and was pronounced dead.

The tragedy hit not only the local community hard but the entire hockey world.

“It’s a terrible tragedy, and you never want to see something like that, especially to a kid who is so young,” Adam Fox said.

Balkind’s entire team was at the Garden and the Blueshirts lifted their spirits with a rousing 6-3 comeback win over the Maple Leafs.

“We got a lot of people who are close to that area. It was a nice way to honor him,” Fox continued. “It was nice to see all his teammates there too.”

The Blueshirts improved on their stats at home after an excellent win that the top contenders should all take notice. Aside from Igor Shesterkin’s ridiculous undefeated stat of 12-0-0 when facing 37+ shots or more, NY is tough to beat at MSG.

This season, the Rangers are 11-3-2 at home. Gerard Gallant deserves a lot of credit for that as he’s been masterful on the bench with his matchups.

When scoring first they are undefeated (7-0-0) but last night it was the Leafs who jumped on the them early and often. Toronto took a 3-1 lead after one, but the Rangers tied it by the end of the middle frame and eventually won 6-3. This season, the Blueshirts are now 11-0-2 when leading or tied heading into the third period at home.

“I think we know it,” Reaves said as relayed by Mollie Walker of the NY Post. “I think maybe some of the league doesn’t believe it, but let them keep [not] believing it. We’re gonna keep doing our thing and, I mean, the standings don’t lie.”