Rangers Roundup: Artemi Panarin would love to do ‘stupid s–t’ at the blue-line, and more

The New York Rangers will look to even their series against the Carolina Hurricanes in Game 2 on Friday in Raleigh.

After a very low scoring affair where the Rangers got one goal from the Kid Line, Artemi Panarin had some funny comments before the big game.

Speaking with reporters privately sans a translator, Panarin was asked about the team’s conservative style of play in Game 1.

“I would love to do some stupid shit on the blue line, but I can’t,” he quipped.

If there is one player Gerard Gallant should trust to take a few more offensive chances, it should be his top leading scorer in the regular season.

Of course, his biggest point came in OT of Game 7 against the Pittsburgh Penguins to complete the 3-1 series deficit comeback.

With the clock ticking on the man advantage, Panarin received a cross-ice pass from defenseman Adam Fox and moved down the slot. His wrist shot must’ve had eyes as it eluded Jarry’s glove for the series winning goal. It was Panarin’s second career overtime playoff tally and probably his most memorable one to date.

“Honestly, the ice wasn’t great tonight and it effects [Panarin’s] game more than other guys,” Gallant said afterwards. “He’s the guy that I said to myself going into overtime ‘I know it’s going to be him’.” 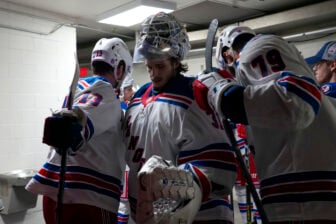