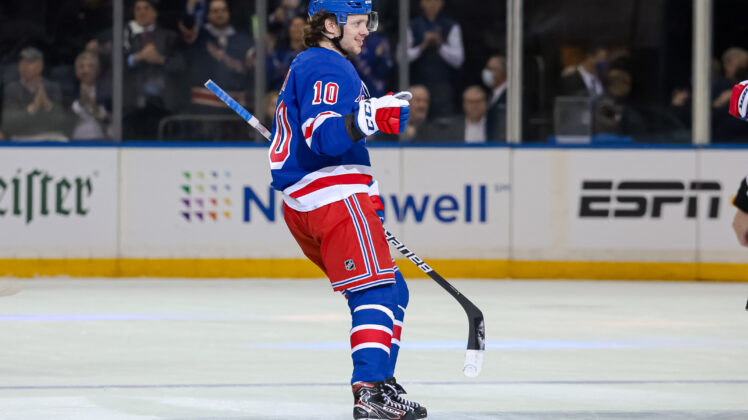 Artemi Panarin is red-hot these days. After picking up three assists in last night’s victory over the Anaheim Ducks, he’s registered 1 goal and 7 assists in just his last two games alone. The Breadman also has a point streak of five games where he’s accumulated 12 points (1G – 11A).

His recent scoring surge has moved him up the NHL points ladder to 7th, where he’s tied with Mikko Rantanen of the Avalanche. Panarin is 14 points behind Connor McDavid, who leads the league with 85 points.

Panarin struggled earlier this season but is back to his usual scoring pace since joining the Rangers. His 1.29 points per game average is good for 6th.

Panarin, 30, has 71 points in 55 games this season for the Rangers and even though he’s always smiling, the Breadman seems to be having more fun than usual lately.

“Maybe if he saw the 2 on 1 was with someone else, Fox wouldn’t have done it after such a long shift,” Artemi said laughing.

The Breadman was feeling it even when he wasn’t being directly interviewed. While Chris Kreider was being asked about scoring career point 400 in the win, he looked up at Panarin, who was off to the side and said, “Hey Bread! What do you have, 450 points in like half the games?”

Panarin shot back, “I only care about plus minus.”

Well it looks like the more fun Panarin has, the more he scores…so laugh it up boys.

The Rangers are expected to make a few trades before the NHL Trade Deadline expires at 3PM ET on March 21.

On Chris Drury’s radar are a number of pending UFA’s, which are known as rentals since there’s a good possibility they will be signing elsewhere come July 1 when the free agent market opens.

We have, though, been told by an individual familiar with the Rangers’ approach that the GM is loathe to use a blue-chip asset in exchange for a rental such as the Ducks’ Rickard Rakell, the 28-year-old who was Zibanejad’s linemate with Team Sweden in the 2018 World Championships.

This is good news for players like Nils Lundkvist and Zac Jones, whom Drury considers blue-chip prospects. Once again, Vitali Kravtsov could be moved for Rakell as soon as today, but the Ducks want a first round pick. 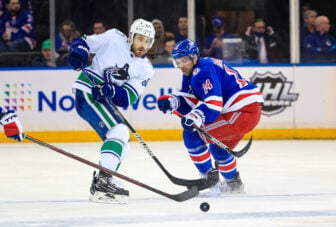 In case you missed our article late yesterday, Henrik Lundqvist was asked about a trade or signing that almost took place during his time with the Rangers.

“I remember one year Mats Sundin was making a move from Toronto, so the Rangers told me, ‘Mats is coming to town– make sure he has a good time and hopefully he’s going to sign in New York’,” Lundqvist recalled.

“I took him out and we had the BEST time!”

“It was a good time. Great night in New York City after a big game,” Hank said. “I was so sure he was going to sign in New York and then a few weeks later we’re out in L.A. and I get a notification on my phone that he signed with Vancouver. I was shocked!”

“I grew up watching him in Sweden. It would’ve been very cool to have him in New York.”

I spoke to a source familiar with that particular move who said it was never close.

The Rangers were cap strapped at the time and would’ve had to make other moves to fit Sundin. Matter of fact, when the team learned Sundin signed with the Canucks, they were still working on whom they could trade in order to make the contract work.