The New York Rangers announced that goaltender Igor Shesterkin has been placed on IR.

Adam Huska was called up from the Hartford Wolf Pack and will back up Alexandar Georgiev in his absence. The 24 year-old is 2-3-1 in six games with the Wolf Pack with a solid GAA of 2.20 and a .924 SV%. He is also waivers exempt.

By placing Shesterkin on IR, he’ll miss the next 7 days at least three games (CHI, @CHI, COL). He will be available next Friday when the Rangers visit the Buffalo Sabres.

“They’re telling me it’s not as bad as it looked,” Gerard Gallant said after the game. “They told me not to worry.”

Igor Shesterkin had to be helped off the ice at 5:08 of the third period of last night’s 1-0 win over the San Jose Sharks. The 25 year-old netminder was dealing with an apparent right leg injury after making a save and diving on the rebound during a scrum in front of the net. He appeared unable to put weight on his right leg.

Shesterkin made 19 saves before he left the game. Alexandar Georgiev came on to save all nine shots he faced to complete the combined shutout.

Considering how bad things looked when he left the ice, a brief stint on IR seems most fortunate. Shesterkin this season is 13-3-2 with a .937 SV% and a 2.05 GAA. 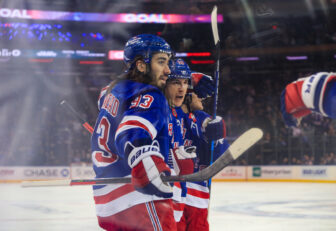 David Quinn was the head honcho at Boston University and loved running the hockey program. It was a job he believed he would retire from. However, when the New York Rangers called things changed.

“I actually said no the first time when they offered me the job,” Quinn explained on the Cam and Strick Podcast. “In the next few days after that, myself and Jeff (Gorton) and Chris (Drury) were talking. They were asking me about other candidates and I started saying ‘what did I do?'”

The now 55 year-old head coach realized at that moment he’d likely never get a chance like that again.

“We circled back and they upped the ante a little bit,” Quinn remembered. “That’s not why I said ‘no’ the first time but it worked out as a great negotiating ploy.”

Ultimately, Quinn had an idea that he was also going to be let go and admitted the conversations with Chris Drury were tough.

“In my conversations with the Rangers before I got let go I asked one question, ‘Did we overachieve, underachieve, or do what we should’ve done this year,’ and the answer I got was, ‘We probably overachieved a little bit.’” Quinn revealed. “Then I said, ‘What the f*** are we talking about?’”

Quinn finished his Rangers tenure with a record of 96-87-25 and a .522 wining percentage in three seasons. 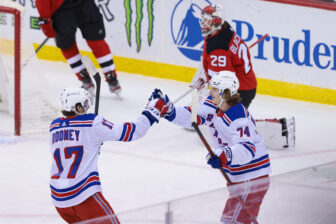