The New York Rangers will be led onto the UBS Arena ice by goaltender Igor Shesterkin against the bruised and batter Islanders.

In a rare moment, Gerard Gallant gave in to the media and announced his starter after today’s morning skate.

Igor Shesterkin to start against the Islanders

There really was very little doubt who would start tonight. Although, if anyone looked at each goalie’s career numbers against the Islanders it would raise an eyebrow.

“I don’t take (prior record) into account a whole lot,” Gallant said. “I’m more worried about this year with what I know about our goalies.”

In that case, the choice of Shesterkin is an easy decision.

The head coach may have been having a little fun with the press today. While discussing the chemistry that’s been building with Ryan Strome, Artemi Panarin, and Kaapo Kakko he had this to say.

“I like the way they’ve been playing, especially the last four or five games but that might be one of the changes tonight,” Gallant said with a giant grin. “I don’t want to say too much because I might change that.”

All jokes aside, the lineup is going to look similar to the one against Buffalo.

The only expected change is Nils Lundkvist will come in for Jarred Tinordi and that will move Patrik Nemeth back to the left side.

Then again, maybe Gallant was serious? 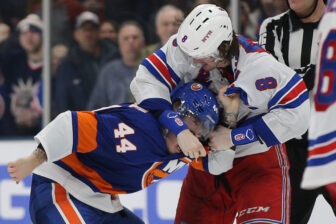 Also Read:
Rangers vs Islanders by the numbers: Take it to them!