Kevin Shattenkirk never got his day with the Stanley Cup when the Lightning won it in 2020. Lucky for him, the now member of the Anaheim Duck watched his former team win it again this past season. By doing so, they gave Shattenkirk his day with Lord Stanley.

Kevin Shattenkirk signed with the New York Rangers in the summer of 2017. He did so as the top UFA on the market and with a major hometown discount. Kevin wanted to play for his boyhood team so bad he gave up three years of term.

Unfortunately, Shattenkirk struggled as well as did the entire team. On top of that, he was battling through a knee injury that eventually required surgery. This led to him being bought out in the summer of 2019. He was angry and hurt and he used that to fuel his Cup run.

After winning the Cup he was interviewed by NBC and he said, “It was a hard road in New York, there was a lot of tough times.” Shatty was visibly upset reflecting on his time on Broadway before dwelling on the opportunity in Tampa.

He wanted to win in NY, and bring the Cup back to the Garden. Consider it mission accomplished as he held it high over head in front of MSG.

Last week, Frank Seravalli noted that the Rangers may be looking to trade RFA, Pavel Buchnevich. According to his report, he stated Chris Drury is talking with teams about a possible deal for the 26 year-old winger.

So why would the Rangers even think about trading him? First off, they have two bright young stars in Kaapo Kakko and Vitali Kravtsov that play the right wing. Both are on ELC’s with cost control for next season. Buchnevich, on the other hand will make upwards of $5 to $6 million on a multi-year deal.

This has his name persisting in trade talks with Elliotte Friedman dropping this note in his latest blog.

One situation to watch: Pavel Buchnevich, Rangers. Arbitration eligible. UFA next summer. Too expensive to keep? Other teams like him.

Looks like this is one rumor to keep an eye on. 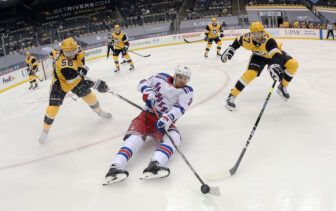 NHL: Seattle Kraken will have a lot of good players to choose from