Jun 22, 2018; Dallas, TX, USA; Nils Lundkvist poses for a photo with team representatives after being selected as the number twenty-eight overall pick to the New York Rangers in the first round of the 2018 NHL Draft at American Airlines Center. Mandatory Credit: Jerome Miron-USA TODAY Sports

The New York Rangers held one last practice for the rookies today at the MSG Training Center. Many of the kids will be going back to their respective minor league teams, and some to the AHL Wolf Pack.

Others are fully expected to be announced as part of the pro training camp roster. Expected are Morgan Barron, Will Cuylle, Zac Jones, Lauri Pajuniemi, and Braden Schneider to just name a few.

Of course, Nils Lundkvist will have a lot of focus on him when camp opens tomorrow.

Note: Austin Rueschhoff and Evan Vierling did not participate due to injuries sustained in the rookie games.

“I feel like I’ve had a great couple of years back home in Sweden,” he said at the start of Development Camp. “It feels like I’m prepared for this and hopefully I can do my best. It’s not me that is going to decide if I’m ready.”

Lundkvist has matured both mentally and physically since being drafted. He stands in at 5-11 and 187 lbs with his skating above average and a great shot. His hockeyIQ is what should allow him to adjust to the NHL faster than most.

“I haven’t stressed,” he said about getting ready. “Getting older, getting more experience both on and off the ice I think has been good.”

Nils struggled a little in the first rookie game against the Flyers. Most likely because he was overworked on defense as the Rangers lost two players early in the first period.

However, it was a script flip in Game 2 where he used his speed and elite shot to give the Rangers a 3-2 lead that they would hold on to. Nils should continue this level of play in training camp and make the team to start the season.

“It’s been a good couple of weeks,” Lundkvist said. “It was fun to score that goal. It was fun to win as a group and go into main camp here.”

Jacob Trouba spoke during the NHL Media Tour about the COVID-19 vaccine and why he’s a big advocate for getting it. His wife, who works an ER in Florida, knows first hand what it’s like dealing with the virus and helps him weed out good and bad information.

“You hear so much stuff, and what do you believe?” Trouba said via The Athletic. “Who do you want to read? There is a lot of misinformation out there. My wife’s pretty up to date on it. And she gives me the lowdown on what’s true and what’s not. So I share those when I feel comfortable and confident that they are the correct facts.”

NHL deputy commissioner Bill Daly told multiple media outlets that the league projects 98 percent of its players will be fully vaccinated against COVID-19 by opening night of the 2021-22 season next month.

According to that math, fewer than 15 players would not be vaccinated by Oct. 12.

“We want everybody fully vaccinated and, obviously, the last couple of months have shown that that doesn’t necessarily preclude the fact that people are going to get the infection,” Daly told The Athletic. “But it certainly increases the likelihood that it’s not a serious health and safety concern.” 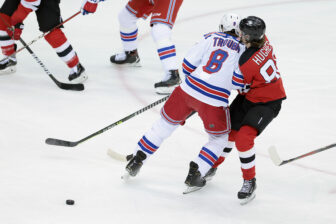 So will the Maple Leafs have to make a trade before the season starts? And latest in Vancouver. Read it here.