The Tampa Bay Lightning defeated the NY Islanders by a 1-0 score in Game 7. That gives them the right to face the Montreal Canadiens in the Stanley Cup Final. One of their key performers last night was former Ranger, Ryan McDonagh.

Namestnikov was then flipped to Ottawa for Nick Ebert, a 4th round pick in this upcoming draft.

There is no doubt that at this time, the Lightning have clearly won this trade as they are four wins from back-to-back Cups. Of course, there is still plenty of time for the Blueshirts to even this one out thanks to Nils Lundkvist and possibly Karl Henriksson. 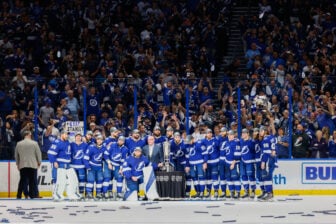 He was brought in to win, and to make the playoffs. Which is something that Chris Drury has been asked to do from owner James Dolan. In a wide-ranging interview conducted by Steve Serby in the NY Post, he reinforced their mission with one of his own.

“Well, I want to win a Stanley Cup,” Gallant said. “I never won a Stanley Cup. I enjoy the game, I still have a lot of fun coming to the rink, and I got two grandboys, 4 and 5 years old, and they’re pretty happy to see grandpa coaching an NHL hockey team.”

The Jack Eichel saga, is likely to drag on up until the NHL Draft. However, those intensified trade talks may die down for now. According to TSN’s Darren Dreger he feels that Sabres GM Kevyn Adams has had all his conversations and understands the framework for a deal.