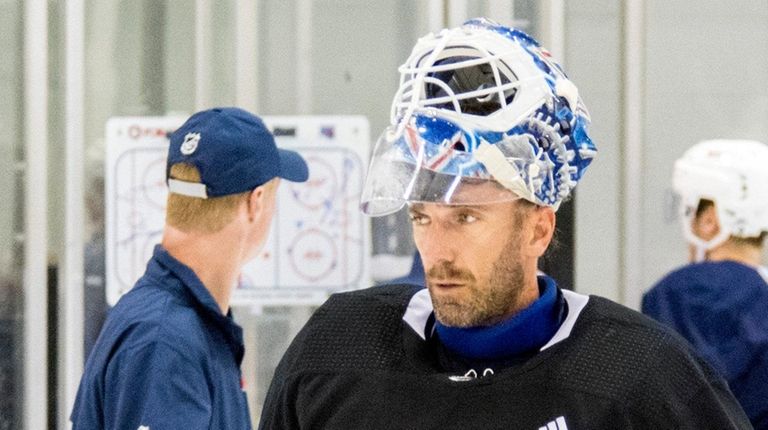 The 2018-19 season is right around the corner and the Rangers are making all of the necessary preparations as the first weekend of training camp came to a close.

New Rangers head coach David Quinn has said that he wants his team to be “fast, physical, and relentless.” During Sunday’s practice session, Quinn had the players run some drills that were all about his mantra.

My pal Dave Maloney says "For sure, if they had this drill in my day, there'd have been a fight.* pic.twitter.com/jS58nYQlcJ

David Quinn spoke yesterday about emphasizing one-on-one battles I camp. So here's a little bit of what they're doing today. pic.twitter.com/tL3xBJSzMD

The intensity in these drills was very high, but unfortunately, it led to an injury scare as Rangers center Mika Zibanejad needed to leave the ice early. Thankfully, Zibanejad simply “had the wind knocked out of him” by 2018 draft pick Joey Keane. Zibanejad, who was reportedly hit up high, has a history of concussions and that is the last thing the Rangers need to worry about heading into their first preseason contest on Monday.

Coach Quinn said Mika Zibanejad had the wind knocked out of him but is fine. #NYRTC

Did Coach Quinn check out a DJ ZBAD show when he visited the @NYRangers swedes this summer?! #NYR pic.twitter.com/QQgZ8ipUnm

In speaking with reporters on Saturday, Rangers goaltender Henrik Lundqvist answered questions about his health, his new bench boss, and more.

On his knee – “Last year was a little different with the knee situation and after having the injection. Took a couple of weeks off but since then I’ve been skating and training the way that I want to, skated a little more this year.” When asked in a follow up about the injection he had into his knee, Henrik added that he staggered his skating schedule. “Right after the season, took four weeks off and when I got back to Sweden I skated for a few weeks, started working out, took a break from skating and then back to skating in late July. A little bit more skating this summer.”

On David Quinn’s Style of Play – “We can play many different ways in this league, the most important thing is that everyone buys in and gets on the same page. For me the game doesn’t change, I need to focus on what I need to do and at first as a goalie and the D-men you gotta work off of each other but I need to focus on my game and as a team we need to come together and everybody needs to understand what needs to be done. There are a lot of different ways to play, it’s just about buying into that style.”

On his mindset – “You gotta look at short-term. Right now, have a really strong camp and build it week by week. You can feel that we start over a bit with the new system, new coaching staff, different mentality. We can’t look too far, need a good camp, good start and build off of that and see how far it takes us and that will tell us how we will stack up against other teams…We have a lot of skill in the room and hungry players, that is a great combination. We need to get on the same page with how we want to play and take it from there.”

Henrik was also about his commitment to the Rangers, something which he has been asked about many times since the Rangers started their rebuilding process. But Henrik says he is excited for what’s to come with this newer group of Blueshirts. “People talk about a rebuild and no one knows how long of a project that is, but we will focus on the start, see how we stack up and try to do as good as we can. There is no other place I want to be. I feel great, excited to be back and see how far we can take it this year.”

You can watch the full interview below.

Finally, the Rangers will start their preseason on Monday night in Newark against the New Jersey Devils. The Blueshirts announced their projected lineup for the contest, although changes can be made to the team for Monday.

Coach Quinn said he was very happy with the effort he has seen so far and is hoping his players can continue to build on it for the duration of camp.

"We want to continue to build off of what we've done the first two days. We want to play with pace. We want to be physical"