Da Beauty League is back, and K’Andre Miller has joined the fun. Based in Minnesota, this summer league attracts young pros from different levels of play, including the NHL.

There is no denying that K’Andre Miller had an amazing rookie season. It all culminated for the 21 year-old budding star with a spot on the NHL’s All-Rookie Team. In his first season fresh out of college he recored 12 points, a +9 rating in 53 games while averaging 21:07 a game.

So what’s K’Andre up to now? Just scoring goals and having some fun.

Here’s his first, a wicked wrister from the circle.

His second goal, the puck finds him in the slot.

After the game, Miller met fans and made some kids smile. 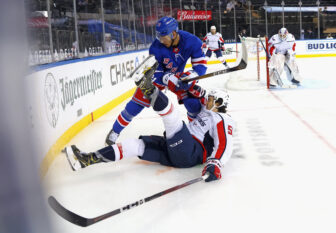 The New York Rangers put out a two minute video to discuss why they decided to draft four promising defensemen.

Things continue to heat up all around the league. Many predict this could be the craziest offseason we’ve seen due to the flat-cap and Seattle expansion. The fact that three major events take place within 8 days (Expansion Draft 7/21, NHL Draft 7/23-24, and Free Agency 7/28) all add to the excitement.

Zach Hyman has been granted permission to talk with teams ahead of free agency. Read more.