The New York Rangers are off until December 22, when they face the Montreal Canadiens at home.

Unfortunately, it sounds like they will be off longer than that as the the threat of an NHL Pause is now on the horizon due to COVID-19.

NHL heading towards a COVID Pause

Currently three teams in the NHL are shutdown. The Calgary Flames, Colorado Avalanche, and Florida Panthers are all postponed until after the Christmas Break.

In Toronto, Vancouver, and Ottawa they’ve reduced capacity to 50% for games. The Predators have been hit hard recently with cases, prompting forward Nick Cousins to tweet: “Pause the season until after Christmas ? This is ridiculous.”

Nearly 150 NHL players have been on the protocol list so far this season, and the list has been growing rapidly in recent days.

While the NHL has put into place enhanced protocols and taking things on a team by team basis, it appears the inevitable is coming. A pause on the season is likely on the horizon.

One source told me that a pause is really not going to help. Cases are on the rise everywhere as winter approaches, and the NHL could still be dealing with it whenever they resume. The NHL also made the implementation and adherence to the enhanced protocols official until January 7th.

However, if the league does pause it will effectively end the NHL and NHLPA’s participation in the upcoming Olympics.

It’s been a relatively quiet start for the Rangers top center. After flirting with the 50 goal mark two seasons ago, Mika Zibanejad hasn’t been on the same scoring pace.

The good news is that Mika appears to be heating up at the right time with 7 points in his last 7 games, including 4 points in last two.

While there was a lot made of the Rangers’ coach Gerard Gallant and forward Ryan Reaves facing their old team, it was member of the Knights that stole the show. Brett Howden, who played three seasons in New York picked up two points to get the better of his old squad.

“It was a pretty fun night,” Howden said. “Obviously I was really happy we got the win. I think I think I’m playing probably some of my better hockey right now. I just want to keep building on that and keep trying to do the right things.” 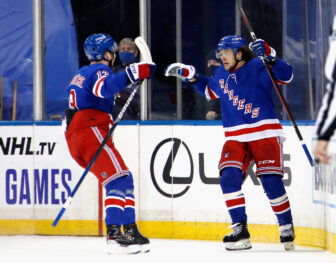