Rangers’ Ryan Reaves once said, “I’m the solution to your Tom Wilson problem”

If Tom Wilson thought everything was settled for rag dolling Artemi Panarin and then calling to apologize, he was wrong. The Rangers sent a clear message that they won’t be letting bygones be bygones.

Late last night, they went out and got Wilson repellent, Ryan Reaves. The man nicknamed Reav-o once said, “I’m the solution to your Tom Wilson problem,” is now on Broadway.

Reaves took notice of what Wilson did to Panarin

Ryan Reaves was on John Scott’s podcast and gave his thoughts after watching Tom Wilson run wild on the Rangers. “I was texting with (Jonathan) Marchessault who sent me the clip, I couldn’t tell if he was going to get 50 games or nothing,” he said. “When you see it, that’s a scrum – he took it too far. But again, there’s another one of those scenarios where he knows he can do that and there’s going to be no repercussions.”

The 6-2, 225 lbs enforcer that made this prophetic observation is now a member of the team. “If New York had anyone in their system they would’ve called them up and their would’ve been repercussions. There were a ton of fights and that was great on their team but I don’t think Tom Wilson was scared to go into the next game.”

When Scott asked him if Wilson would’ve done that if he were on the bench, Reaves flat out said no and gave his reasons why.

Reaves is no stranger to the physical aspects of the game. In 686 games he has accumulated 937 penalty minutes. He can also chip in with some occasional offense as he’s picked up 101 points over that time. The big forward also likes to throw the body with 2,322 hits in his career to go with 75 major penalties.

Reaves will be reunited with new Rangers head coach Gerard Gallant, who was in charge at Vegas from 2017-18 to 2019-20 after being acquired for a third round pick.

The 34 year-old posted the lowest goal total of his 11-year NHL career last season, but the Blueshirts didn’t get him for his offense.

Reaves logged just one goal and four assists while racking up 27 penalty minutes in 37 games during the 2020-21 regular season. In the playoffs, he had no goals and one assist in 12 games, missing two games after getting suspended for pulling out hair from the Colorado Avalanche’s Ryan Graves. 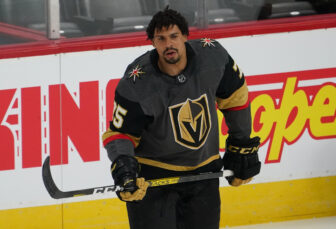 Also Read:
New York Rangers trade for Ryan Reaves; no one is pushing them around anymore