Saturday June 22nd, 2019, Vancouver: I’m getting ready for day two of the NHL Draft and after entering the arena I spot one prospect after another.

Patrik Puistola is browsing some of the merchandise in the fanshop with his dad. Nils Höglander and his family walk by me. It’s a great reminder that for most of these prospects and their families, the draft is as much an event to enjoy as it is for fans.

One of those family members having a great day in Vancouver is a kid, who 2 years later would be selected by the New York Rangers.

Ryder Korczak was in Vancouver to support his older brother, Kelowna Rockets defenseman Kaedan. For the younger brother, it was a completely different experience though. Due to the pandemic, the 2021 draft was done remotely and the Korczak family rented out an entire restaurant to watch day 2 of the draft back in July.

“I was 3 years old. My dad played for Michigan Tech before I was born. He was a big hockey guy and introduced me and Kaedan to the sport,” Korczak recalls. “Ever since then, we fell in love with the game.”

Growing up in Yorkton, he played for the Yorkton Terriers before being picked 29th overall in the 2017 WHL Bantam Draft by the Calgary Hitmen. In his first full season he had 15 points in 50 games and 5 points in 11 playoff games. The biggest challenge for Korczak at that age was his size and playing against bigger guys. “My biggest challenge starting in the WHL was my size. I was 5’8″, 150 lbs and you’re playing against guys that are 6’2″, 220 lbs.”

Despite his first season being a huge adjustment, a team closer to home saw something in him and at a young age the versatile forward was involved in a trade.

“I was still in school, in grade 12. I was in math class and my agent called me and said ‘there’s an offer on the table to go to Moose Jaw so talk to your parents and we will chat after school’,” Ryder recalls. “The next day the trade went through and it was a memorable day.”

It’s a change that worked out well for the player of course, resulting in him being drafted by the Rangers 2 years later.

“Being traded is quite the experience. You don’t know what to expect,” he said. “I was 16 at the time but Moose Jaw welcomed me with open arms and it was a nice change.”

His new team also began to use him in a different role, shifting him to center. “I played wing in Calgary before moving to center. I can play all 3 positions,” he explains. “Playing center you are more responsible in your own zone of course. I can play LW or RW. I’m comfortable either way.”

Not every player is this comfortable being moved around the line-up. Chris Kreider or Will Cuylle have stated they prefer to stick to one side, while Brett Berard and now Ryder Korczak are more comfortable shifting to the opposite side.

Korczak’s biggest asset is his offensive creativity. His puck-handling, pace and ability to surprise opponents with deceptive shots makes him exciting to watch.

When asked to describe himself as a player, Korczak says, “I see the ice well and read the play. My ability to make that first pass and create opportunities. I need to work on my defensive game to get to the next level though.”

The draft and joining the Rangers organization

Ryder Korczak spoke to the Rangers twice prior to the draft and while he was contacted by several other teams, the Rangers were on his mind at the start of day 2. When he saw his name on the screen, it really hit him that he was now a New York Rangers prospect.

“I am super honored to be drafted by the New York Rangers,” he admits. “I was super happy at camp and to share the ice with so many great players. It was nice spending time with people other than your immediate family.”

Ryder’s brother Kaedan was pumped up as well. When I asked if there will be a sibling rivalry, Ryder laughed and said, “You betcha there will be!”

His first interaction with the organization after the pick was a positive one. “What stood out to me was scout Kim Gellert, who was the player development coach in Kelowna when my brother was there, told me to say hi to my brother for him,” he remembers. “That personal touch really stands out and gives me a good feeling about the team.”

It’s a subtle reminder that this is an environment with connections everywhere. And for scout Gellert to remember Ryder’s older brother, and mention his name, proves how personal these conversations can get.

On September 9th, Korczak flew to New York to attend the Rangers development camp with all other prospects. One familiar face for the young center was Matt Rempe, the 6th round selection from the 2020 draft.

Rempe and Korczak work out together during the off-season. It will be a great opportunity to see New York for the first time, and spend time on the ice with other prospects. Another player Korczak connected with is Braden Schneider who was the first one to call after the draft pick was announced. 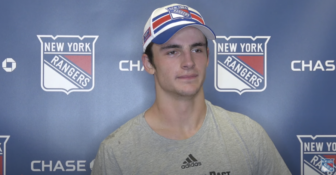 Also Read:
Braden Schneider wants Rangers brass to see he can “play with the big boys”

Last season was a weird one, as we’ve heard in previous interviews due to the Pandemic. For Korczak, it wasn’t any different.

The WHL was postponed several times and while training with his youth team Yorkton Terriers, his agent looked into alternatives. “My agent mentioned the option to go south of the border and play in the USHL to get some competitive games in ahead of the draft.” However, 18-year old forward waited it out and eventually in mid-March, he was back on the ice for the Moose Jaw Warriors.

During the off-season, Korczak spends his time in Calgary practicing with some familiar names. “I train there with a group of players including Jordan Eberle, Adam Lowry and Josh Morrissey,” he said. “It’s great to share the ice with NHLers, and learn from them, seeing them up close.”

It’s a nice preparation ahead of his time in New York this month, and as preparation for the upcoming season where he will face off against a bunch of players in a similar situation.

While Braden Schneider and Matthew Robertson are expected to spend their time in Hartford, the WHL is still home to goalies Dylan Garand and Talyn Boyko, and centers Matt Rempe and Jayden Grubbe. He won’t lose sight of what’s important though when he sees those familiar faces on the ice.

“I look forward to playing the other Rangers picks this season,” he notes. “On the ice it will be a battle where I want to do whatever I can to get the win, but afterwards I am sure we will catch up.”

When asked about his favourite player and team, Korczak doesn’t need much time to respond. “My favourite player growing up was Patrick Kane,” he reveals. “His speed, agility and the way he plays the puck is so cool to watch. He’s one guy I really admire. I was 8 when the Blackhawks won that first Cup in 2010 so they have had a big influence on me at a young age.”

Korczak may be a big fan of Kane but it’s a former Moose Jaw Warrior he styles his game as.

“I try to model my game after Brayden Point, I think I have a lot in common with him stylistically,” he says. “His determination to make it in the NHL is an example to others. I’m not saying I will be as good as him because he is a top-10 player in the league in my opinion but he’s an example for kids like me.”

Finally, I ask him about his favorite number. Ryder was given number 16 and 19 when he was with the Yorkton Terriers, and 14 with the Calgary Hitmen. When he got to Moose Jaw, all 3 of those were already taken so he went with number 38.

“It was such a rare number so I decided to pick something nobody else had.”

PS: I want to thank Ryder Korczak for sitting down with me and giving me the opportunity to share this story with our fanbase.