Rangers’ Sammy Blais returns to the ice after ACL surgery

The New York Rangers lost forward Sammy Blais on November 14. He was hurt in the third period of the Rangers 4-3 win over the New Jersey Devils by P.K. Subban.

On the fateful play, Blais and Subban went to the corner to retrieve the puck. The Devils defenseman appeared to stick out his skate causing Blais to go hard into the boards leaving him writhing in pain. Blais needed help off the ice and could not put an ounce of pressure on his right leg.

The Rangers announced that Blais would require ACL surgery and miss the next 6-8 months.

“I feel for the kid,” head coach Gerard Gallant said the next day.

“I feel horrible for [Blais],” Barclay Goodrow added. “He’s a big part of this team. He’s going to leave a big hole to fill. Hopefully his recovery goes well.”

Blais, 25, was placed on LTIR giving the Rangers an additional $1.5M in cap space which was helpful in acquiring several key players at the NHL Trade Deadline.

He had 4 points (all assists) in 14 games before his season ended.

On Wednesday, the Rangers received a nice surprise when Blais made an appearance in a non-contact jersey.

This comes just around the 6 month mark of his recovery. While it is likely he won’t be able to play in this series, he could be an option in later rounds. 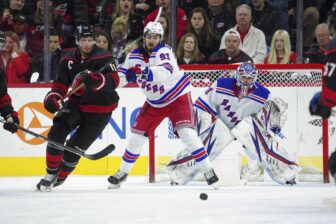