Rangers say ‘been there, done that’ after losing Game 1 in OT

I guess if you are going to be considered one of the most resilient teams in the NHL, you have to let bad losses roll off your back.

Make no mistake about it, last night’s 2-1 overtime loss to the Carolina Hurricanes was a bad one. The Rangers were up early after a Filip Chytil goal and fell into a defensive shell that worked for 40 minutes.

Once the third period started, they were overwhelmed by the Canes, who fired 10 shots to the Rangers 4 before tying the game off the stick of Sebastian Aho with 2:23 remaining.

Carolina would eventually win it off a a harmless Ian Cole shot that Ryan Lindgren inexplicably put his stick on to deflect it by Igor Shesterkin.

New York Rangers: ‘Been there, done that’

“Definitely a tough loss,” Gerard Gallant said afterwards. “But we’ve been there, done that. We’ve got to battle back.”

The Rangers head coach is obviously referencing their Game 1 loss in Triple OT to the Pittsburgh Penguins in Round 1. Of course, they eventually found themselves down 3-1 in that series, which not something they will be able to come back from against a much better Carolina team.

New York did a great job taking away Carolina’s forecheck. They did so thanks to Igor Shesterkin’s puck handling and a commitment by all 5 players on the ice to support each other and get pucks out.

“I was really happy with our game. They put a big push on in the third period the first 10 minutes, and we weathered that storm,” Gallant added. “But the first two periods was perfect hockey for us. We didn’t spend a lot of time in our zone and got pucks out. I thought it was our best game of the year, I really did.”

The biggest mistake the Rangers made came in the third period where they sat back, despite what the head coach said.

“We didn’t sit back but they made a push,” is the way Gallant saw it.

The fact is the Rangers did sit back and instead of trying to find a way make plays up ice. They consistently kept lobbing the puck high in the air out of their zone. All that did was give it back to the Canes to regroup and attack again.

“I didn’t think we got it deep enough,” Mika Zibanejad said. “We got it out of our zone, but they regrouped pretty fast. They’re a quick team. That’s a really good team we’re playing. Let’s not forget about that. They got their push and got their crowd into it and got some momentum, and obviously the goal.”

One specific play will haunt the Rangers in this game as Kaapo Kakko had a wide-open net late in the third period and missed. He hits that and the Rangers go up 2-0 to take Game 1.

It’s hard to get on his case, especially when you consider it was the Kid Line that gave the Rangers the lead in the first place. They were also by far the only legit threat offensively.

That means New York’s top two lines better find a way to generate offense or this series will be over quick. 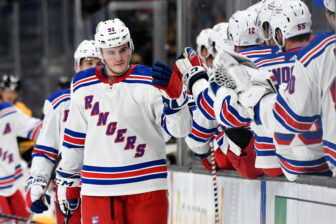 The Calgary Flames and Edmonton Oilers decided not to play any defense in Game 1 of their series. Plus Ian Cole lifts the Carolina Hurricanes over the New York Rangers. Read more.