The New York Rangers acquired speedy and gritty winger Frank Vatrano on Monday from the Florida Panthers for a fourth-round pick.

In a subsequent move, forward Morgan Barron was sent down to the Hartford Wolf Pack to make room for the new acquisition.

On July 1, Vatrano will be an unrestricted free agent.

The New York Rangers announced on Wednesday afternoon that the club has assigned forward Morgan Barron to the AHL’s Hartford Wolf Pack.

Barron, selected in the sixth round (174th overall) by the Rangers in the 2017 NHL Entry Draft, has skated in 23 games with the Wolf Pack during the 2021-22 season. Barron has scored 14 points (9 g, 5 a) in his second professional season at the AHL level.

Rangers team up with STAPLE

The New York Rangers have partnered with world renowned brand STAPLE, founded by NJ Native Jeff Staple, to create a limited co-branded capsule collection that will be available to fans on Fri., March 25.

The products, which include t-shirts, hoodies, long sleeve crewnecks and hats, will be offered exclusively at MSG Team stores inside of Madison Square Garden during the Rangers game on Friday 3/25 when they take on the Pittsburgh Penguins.

Staple, a NJ native, grew up a Rangers fan and attended Parsons and NYU. While attending NYU, Jeff played goaltender for the club hockey team, so there is a nice local tie here, and the products consist of some cool and different designs that fans will really enjoy. 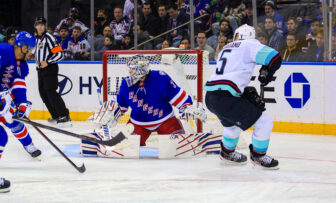