The Rangers Are Unwatchable, And That’s A Good Thing 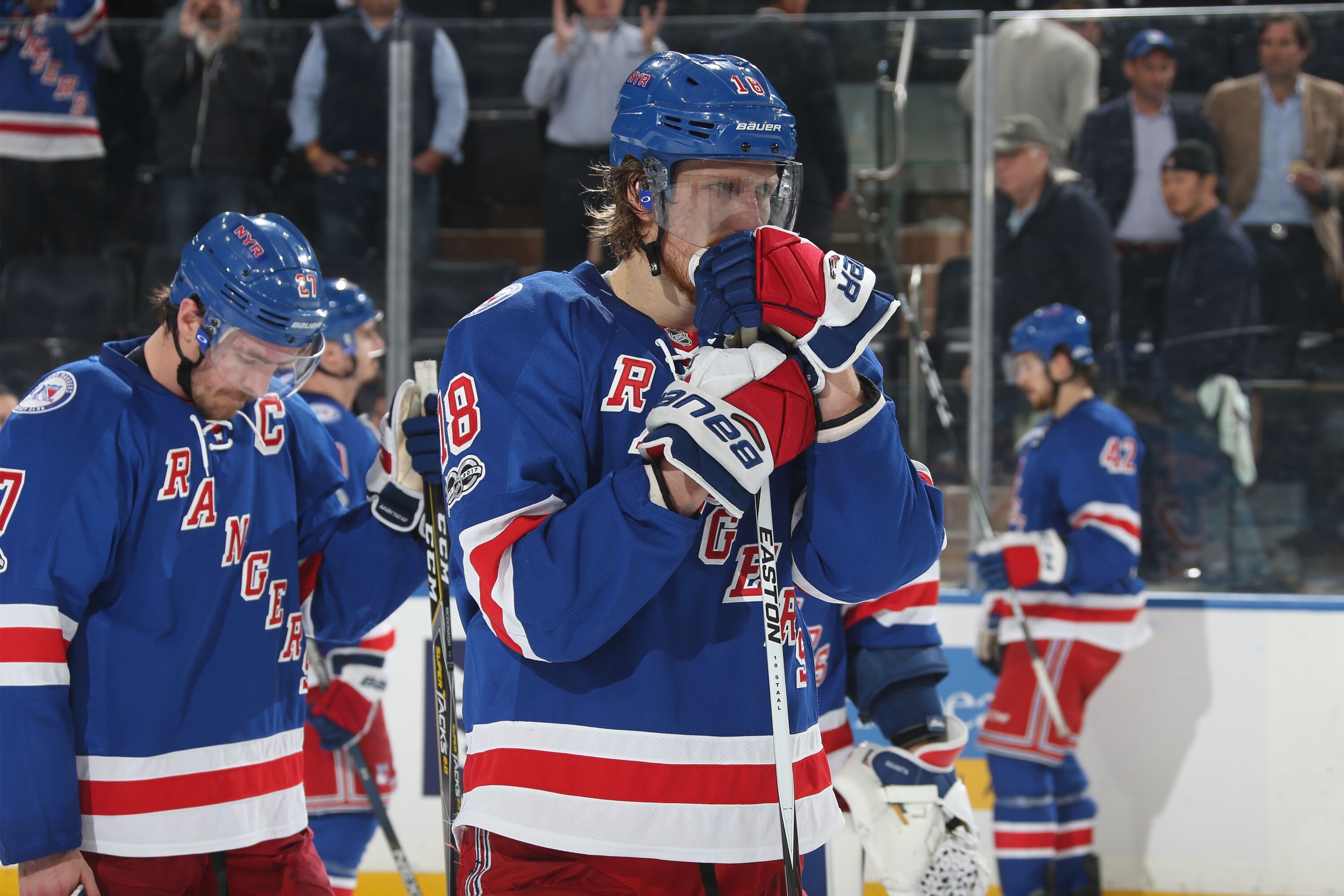 I don’t like watching the Rangers play lately, but I do in fact like when like when they lose. The Rangers currently are the in a position to become lottery contenders for the first overall pick in this year’s draft, even if the odds are slim. As much as I love the Rangers losing to secure a higher percentage for that pick, I cannot watch them play. Have you ever been to a Rangers game, or any professional ice hockey game, where the peewees play during an intermission and there’s a lot of them and they’re all chasing the puck in a very unorganized fashion? Wait that’s not a bunch of peewees, that’s the New York Rangers you’re watching! I can’t tell you how many times I’ve seen three or even four players go into the corner against ONE opposing player to battle for the puck, IN THE DEFENSIVE ZONE! And you want to tell me it’s all Henrik’s fault? You can just stop reading now because I don’t bash Hank as much as you probably want me to in this article. But let’s get back to the matter at hand, the Rangers are unwatchable and it’s a good thing.

Are they doing this on purpose?

I don’t know how many of you keep watching these abysmal games lately, but Sunday’s game against the Flyers was probably the end of the line for me. It started out fantastic, a fight within 20 seconds of the start of the game (side note, I love that Buch is fighting, adds a lot of grit to his game that the Rangers can count on in his upcoming years), back and forth goals with two more fights sprinkled in and the Rangers and Flyers were tied 3-3 at the end of the first. Looking like an instant classic but after that first period, the Rangers started to lose an edge. Hank let in a bunch of soft goals, but we can only ask so much of him going back to back for two straight afternoon games. The defense started to crumble like it has done all year and it’s embarrassing. After Sunday’s loss, they made it four defeats in a row. They have also dropped eight out of the last ten and 11 out of 14; having a goal differential of -26 and a shot differential of -20 in that span. It’s getting to the point where I hate watching because there is sloppy play from everyone and that in turn leads to Hank getting no support in front.

It seems to be the motif of the Rangers this season; lack of defense, a flurry of goals, the goalie gets pulled, the Rangers lose. At a certain point, it’s just painful to watch my team lose every night, and I know something about losing, I’m a Mets Fan! After getting pulled Saturday against the Senators, he stares down the bench to someone off camera, my assumption it was someone of the coaching staff.

It’s no secret that a team currently out of the playoff race, or in the Rangers situation telling the fans outright that they’re sellers this year, puts unusual strain and fear into the players. Since Hank took over the duties between the pipes, the Rangers have always had a shot at the playoffs and almost always traded for someone to give them the extra push to solidify their position.

Now comes this unusual time for the current crop of Rangers, who have not had their current position in jeopardy. This leads to doubt and distractions for all players, whether you’re on the trading block or not. Remember how Mats Zuccarello felt when Derick Brassard was traded to the Senators for Mika Zibanejad? Some players lose close friends in the process and I feel like a lot of people who watch any sport, not just hockey, forget that these are actual people, not trade chips or commodities. Distracted players lead to poor play, and when every player is distracted it leads to bad hockey. The Rangers just traded Nick Holden yesterday, and that’s hopefully just the start of the fire sale going on in MSG to make the team better in the years to come.

The more they lose, the better the draft pick

Even though they’re last in their division, the Blueshirts aren’t last in the whole league and still have a chance to make the playoffs with 22 games left this season. My fear up until Jeff Gorton’s press conference a couple of weeks ago was that the Rangers would still go on a fool’s run to chase a cup that they have no legitimate chance to obtain this year. Thank the hockey lords that it wasn’t the case, but unfortunately, the Rangers cannot tank in hopes that they can get the first overall pick like some teams do in other sports *cough* football *cough* baseball *cough cough*.

So, having the worst record doesn’t guarantee anything in this sport so why not try to win? Well, there’s still a good chance they can obtain the first overall pick through the lottery. Currently, the Rangers sit ninth in lottery standings with a 5.4% chance of obtaining the first overall pick. That’s not that much, but with the way the team is trending, that percentage could increase in the coming weeks.

Speaking of play, I don’t think I’ve seen Hank pulled these many times in his career and it doesn’t help that his backup is hurt as well. Injuries have hurt this team the whole season and as much as I like seeing all the young players like Boo Nieves, Vinni Lettieri, Tony DeAngelo, John Gilmour, and Neal Pionk get good minutes and overall NHL experience, that lack of said experience is what helped drive this team to last in their very competitive division. Remember, this team started off as one of the worst teams in the league and it looked like a race to the bottom as Hank was starting to show his age and other players were playing very subpar hockey.

The Elephant Behind The Bench

There’s been one person I’ve left out this whole article so far and I think you know who it is; Alain Vigneault. AV has been a poison for this team for a while now and I’m convinced that if the Rangers lost to the Vegas Golden Knights on October 31, he would have been out the door. The Rangers were 3-7-2 before that meeting and would have been last in the league if they lost to Vegas, prompting the boot for AV. Now, this coach still is in charge six days before the deadline and has stated that it’s the team’s job to come to the rink every day and work to get better and to win. I understand that he’s currently fighting for a job that most likely will be vacant come season’s, but calling out poor goaltending was where I couldn’t stand to tolerate him anymore. He is putting out lines of fourth line nobodies instead of responsible defensive players, and calls out goaltending? I believe that he’s the reason why the Rangers didn’t have that fire in them the whole season. His questionable systems and player usage deflated how the Rangers played, and his comments burned a hole in their soul, and mine as well. Hank is the captain in my mind, no disrespect to Ryan McDonagh, but Hank is the heart and soul of this team and fights hard every night. And seeing the disrespect Vigneault showed him like that by throwing him under the bus is unforgivable.

I don’t see the Rangers winning many games or even being competitive in the coming weeks. The team as a whole has given up mentally and the trade deadline doesn’t help to boost morale. I only see this team succeeding next year if they get a whole new coaching and training staff that focus on youth development and trust in the young talent. Except for Jim Ramsay, he’s a legend.

I was always a baseball kid. I played it, watched it and lived it. I’m a Mets fan, so you already know I’m used to bad records and trading my favorite players away. I never really cared because it was what they did, they made a good run every five or six years then they go back to losing. My family also watched football and we’re Giants fans. Better history there with the two recent championships that I can fondly look back on.

Now the Rangers are different. When I first seriously got into hockey, the Rangers made the playoffs year after year or at least had a shot at making a run. Henrik was dominant, and they always had a chance to win each game. This year hurts more than any other, including the other sports I follow. With the Mets, I can be okay with them being bad, and the Giants don’t matter because they’ve won in recent history. The Rangers on the other hand look defeated, they have nothing to show for all the hard work they’ve put in year after year, and the team needs an overhaul. Hank deserves more, the fans deserve more, the whole team deserves more. As much as losing helps the Rangers in the long run, the way they’re losing is heartbreaking. There’s no energy, fire or passion. I thought Sunday’s game was a glimpse into some good old-fashioned hockey, but it turned out to be the same crappy team we’ve been staring at in disappointment this whole season. The trade deadline, offseason, draft and training camp cannot come soon enough for the Rangers who are in dire need of a hard reset.