The New York Rangers may no longer have one of the top prospect pipelines in the NHL, but they are still very good. That’s expected as you transition from a lottery team to a contender.

Using this past draft as a prime example, the Rangers first selection did not come until the second round. Thanks to a trade for Andrew Copp at the deadline, it cost them their first-round pick and you can expect more of the same going forward.

As the upcoming season is just weeks away from training camp opening, the Rangers offseason has been focused on their prospects. They held their development camp in July, and just watched 7 of their best compete at the World Junior Championship.

Below are my top 10 prospect rankings for the New York Rangers organization.

In order to be considered for this list, the player must be 23 or younger and have played 10 games or less at the NHL level.

That excludes players like Braden Schneider, Nils Lundkvist, Zac Jones, and Vitali Kravtsov all of whom played at least 20 games with the Rangers.

Brennan Othmann: He easily takes the top spot as the New York Rangers best prospect and it doesn’t even feel close. The 19 year-old was a force in 66 games for the Flint Firebirds by scoring 50 goals and 97 points. Othmann added 6 points in 6 games at the WJC to help Canada win Gold. However, what stood out was his physical play as he hit everything in sight. It’s one thing to know he can put up points, but seeing him play the game hard will be key to cracking the Rangers roster one day…soon.

Dylan Garand: In his his fifth season with the Kamloops Blazers, he was named CHL goalie of the year. Garand was excellent with a record of 34-9 and 4 shutouts. His GAA was 2.16 and his .925 SV% were good for second in the WHL. Although he wasn’t tested early at the WJC, Garand was sharp in the Semifinals and Final for Canada. He finished the tournament with a perfect 6-0 record, buoyed by a 1.98 GAA, and .925 SV%.

Will Cuylle: A big strong winger that proved he’s more than a projected bottom six player. This past season for the Windsor Spitfires, he notched 43 goals and 80 points in 59 games. Cuylle was also a key contributor for Canada’s WJC run posting 4 points in 7 games. His future with the Rangers may one day be in the middle-six. Will it be this season? That’s one of the biggest questions heading into training camp.

Matthew Robertson: He’s likely the organization’s most NHL ready prospect defenseman. At 6-4 and 201 lbs, he has the size to play with the big boys. Robertson posted 11 points in 65 games for the Hartford Wolf Pack and can still develop into a top 4 defender.

Adam Sykora: One of the youngest prospects in the Rangers’ system at 17 looks like a good one. Last season, he recorded 10 goals and 17 points in 46 games with Nitra. He added 2 goals in 5 games for Slovakia at the 2021-22 Hlinka Gretzky Cup and posted a goal in 4 games at the WJC. Sykora is as advertised for being a hard forechecker who gets under his opponent’s skin. That was on full display at development camp and the WJC.

Bobby Trivigno: The Rangers had their eye on this undrafted star from UMASS for awhile and signed him in March. This past year in the NCAA, he collected 48 points in 36 games which included 20 goals. He was also named College Hockey News’ player of the year. Trivigno is probably the most NHL ready forward prospect on this list.

Ryder Korczak: He is an offensive minded player that registered 79 points in 68 games for the Moose Jaw Warriors of the WHL in 2021-22. His 54 assists led the team and he is easily the Rangers best prospect center in my opinion.

Brett Berard: He’s quick on the forecheck and has some wheels. Berard will be entering his junior year at Providence College where he registered 38 points in 36 games last season. The Blueshirts have yet to sign him to an entry-level contract but believe he has the talent to play a bottom-six role at the NHL level.

Kalle Vaisanen: He plays for TPS in Finland’s top league (Liiga) and scored 5 points in 32 games last season. Admittedly, I did not think too much of his game until seeing him at the recent WJC. Although he only registered 2 points (1G -1A) in 7 games, his play in all three zones helped Finland win Silver. Keep your eye on this big forward, who tips the scales at 6-4′ and 181 lbs.

Bryce McConnell-Barker: The self-described two-way center picked up 23 goals and 49 points in 68 games in the OHL during the 2021-22 campaign. He added another 5 points in 10 playoff contests. McConnell-Barker is a big kid at 6-1′ and 194 lbs, who plays both sides of the puck well. Considering how thin the Rangers prospect pool is at center, he immediately becomes a top 10 prospect in my eyes. 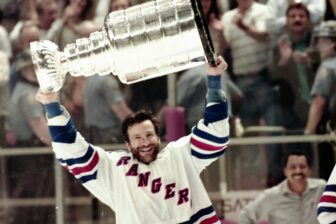