The New York Rangers are starting to come into the Tri-state area in preparation for the opening of training camp on September 21.

One particularly large and tough Blueshirt was in New Jersey on Thursday night. Ryan Reaves, ‘the baddest man in the NHL’ was hanging out with ‘the man’, Ric Flair of professional wrestling fame.

Reaves, 35, registered 5 goals and 13 points while averaging 10:39 per game in his first season on Broadway. He led the team in hits by a wide margin at 279. Defenseman Jacob Trouba was next at 207. His reputation as one of the most feared fighters in the league certainly kept the opposition in check from taking too many liberties on his teammates.

Both Reaves and Flair let out a giant “WOOOOO” to end the clip.

According to the site Hockey Fights, Reaves was in only three tussles in 2021-22 and was voted winner in two of them.

Jim Neilson passed away on November 6, 2020 at the age of 79. He played 12 seasons with the New York Rangers from 1962 to 1974 registering 298 points. Neilson was affectionately known as ‘The Chief’, his mother was a Cree from the Big River First Nation.

Rangers news you may have missed

The Rangers have an offer on the table for Nils Lundkvist, should they take it? Read more here.

Plus, the Rangers will have 15 games broadcast between ABC, ESPN, and TNT next season. Find out more about those contests and just how many will be available on ESPN+ streaming service here. 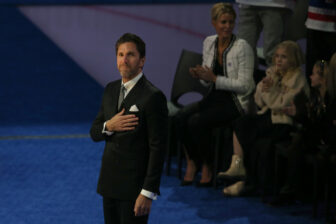