Sammy Blais is going to get the first crack at playing with Mika Zibanejad and Chris Kreider according to Gerard Gallant.

Hey! What about Alexis Lafreniere or Kaapo Kakko? Most assuredly one of them will be on the second line right?

Nope, that will go to Vitali Kravtsov.

“He came [to New York] in early July and started working out,” Gallant noted. “I talked to him about a month ago and said to him, ‘there’s an opportunity here but you’ve got to take it.'”

Yes, ladies and gentlemen, New York Rangers hockey is back!

New York Rangers training camp officially opened today with players going through their medicals and doing some media. On Thursday, the team will hold their first on-ice sessions and the head coach provided some interesting tidbits.

According to what Gallant told the assembled media at his press conference today, he will be keeping the Kid Line together for the start of camp.

Alexis Lafreniere, Filip Chytil, and Kaapo Kakko were extremely impressive in the playoffs. On many nights, they were the best line the team had at controlling play. Although the coach alluded to tinkering with the lines throughout training camp, those three will at least practice together this week.

While it is early and things are “subject to change” as Gallant said, the Rangers are once again putting the 1st overall pick in 2020 and 2nd overall pick in 2019 on the third line. If that remains to start the season, they will be getting anywhere from 12 to 14 minutes a game.

Over the summer, it was expected that Lafreniere would make the shift from LW to RW in order to play on the first line. Kakko was also expected to finally get some real minutes playing with Artemi Panarin and Vincent Trocheck.

Instead, Blais will get first crack on the top line with Kravtsov being placed on the second.

Blais, 26, registered just 4 assists in 14 games last season before going down with an ACL tear. He’s signed for one-year and will be a UFA next summer. Drafted by the St. Louis Blues in the 6th round of the 2014 Draft, he’s never been projected to be anything more than a bottom six winger.

Kravtsov, 22, has had a tumultuous tenure with the Rangers since being drafted 9th overall in 2018. Last summer, he refused to report to the Wolf Pack and requested a trade before bolting back to Russia.

If he’s given top six minutes to start, it seems to be sending the wrong message to players like Lafreniere and Kakko. Both have quietly gone about their business working hard for their ice time on the bottom six for the last few seasons.

“This is what we are doing for the first three days,” Gallant said. “Once the exhibition games start you’ll see different people in different spots.”

Gallant addressed a few other training camp questions such as who will replace Ryan Strome on the top power play unit. Trocheck will get that opportunity to play with Krieder, Zibanejad, Panarin, and Adam Fox.

“Troch will probably play in a lot of the place Stromer did,” he said. “He’ll fit in that power play spot and stuff like that.”

Regarding Barclay Goodrow, who fractured his foot in the playoffs, he will be held out of scrimmages.

Gallant also confirmed that the 6th and 7th spots on defense are open.

“Training camp will decide [third pair defense],” he stated. “Schneider’s going to be there, we know that. You have to play well. The best players play.”

When it comes to penalty killers, free agent signing Ryan Carpenter will be part of it. 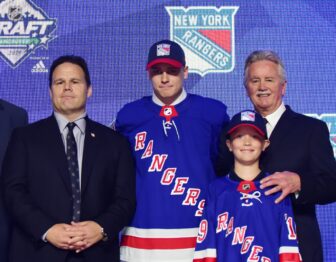